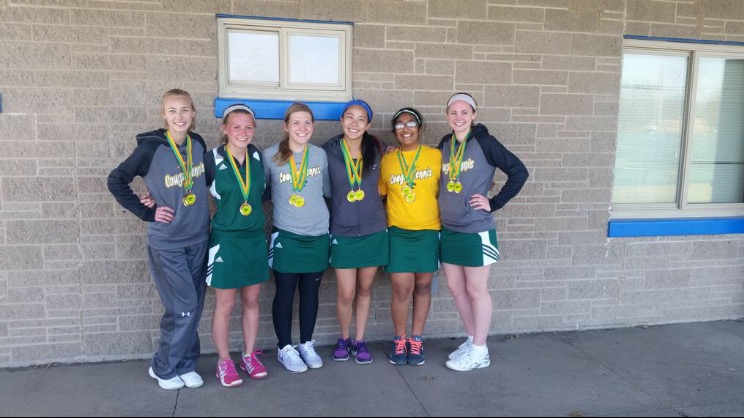 “We all get along very well and we work really well together as a team,” Lauren Gifford, jr., said. “There’s usually only seven or eight of us on the courts at a time.”

Having such a small team has made them closer. Gifford says that she’s enjoyed getting to know the incoming freshmen on varsity, and bonding with her team. This year one of the challenges the team faced was getting enough practice time, because of the rainy weather.

They compete in meets during the week and tournaments on the weekends. Due to the weather many of the meets have been cancelled, so the ones they do compete in are important. The team hasn’t won many meets but, they hope to grow and get better and the season continues. They’re striving to do better, not as individuals, but together as a team.

This year Veena Venkatesh joined the Varsity team as an incoming freshman. Venkatesh has realized that being on a high school varsity team is very demanding and requires a lot of time commitment.

“Definitely some hard work has to be put into practices,” Venkatesh said. “Being a freshman on varsity is both exciting and stressful. I have to make sure I’m always doing my best to prove that I belong on varsity.”

The hard work has paid off and she’s enjoyed the season with her new team. She says it’s been a fun season for all of them. Venkatesh has made a lot of friends from tennis, and has enjoyed her varsity spot on the team.

“My team is really great and I love them,” Venkatesh said.