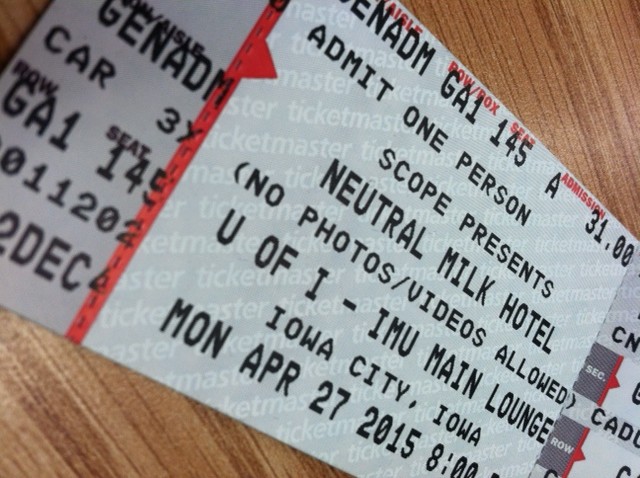 The air was electric as a massive crowd of bodies pressed closer and closer to the stage of the sold out show. The lights were low as the opener took the stage, an eccentric indie band criticizing society through lyrics sung by a pleasantly gruff voice.

As the band’s performance drew to a close the excitement rose, the audience’s anticipation rising as the moments ticked on.

Last Monday night, Neutral Milk Hotel performed at the Iowa Memorial Union in Iowa City. Doors were set to open at seven, and by that time a long line had streamed down the sidewalk from the doors.

Neutral Milk Hotel is an indie rock band, originally formed in the late eighties by Jeff Magnum, the lead singer of the band. The performance at the Union brought individuals ranging from teenagers on to grown adults, highlighting the large reach the band has had over varying ages.

Magnum took the stage first, opening with an apology that he was feeling ill but would perform regardless, and then jumped into their first song.

The music ranged from fast, upbeat songs to slower, more mournful tunes; the audience moved in response to the music. Magnum’s unique voice filled the Union as the band showed off its defining sound using eclectic instruments that they are known for.

Neutral Milk Hotel’s performance was passionate and exciting, complete with an encore that played late into the evening.

Upcoming events at the Union include a performance by comedian Hasan Minhaj on May 1 and Country Night on May 8.