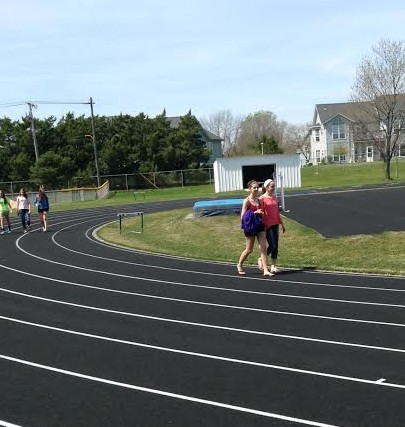 “Often people who need a bone marrow transplant are unable to find somebody who will match and that means that those people have a low chance of survival,” Teacher Brad Horton said. Horton also commented that the tissue typing procedure needed for figuring out if you are a match to someone else costs $100.

“Most people don’t have that $100, so what we do is when people come to our drive, they don’t have to pay any money, but our students then organize fundraisers, and this walk is one of those fundraisers,” Horton said.

This was the first year that any of Horton’s students have chosen to do a walk like this. Horton liked the creativity that was shown by the nine students who helped organize and participated in the event.

The overall cost to participate in the walk was free. Preparing the food items that were sold was the only thing that cost money to set up the event.

About a total of $480 was raised at the walk. Donations were accepted and individuals had to pay $2 to walk and had to pay for any of the food they bought.

Last year the bone marrow drive had 76 individuals who were registered to donate.

“I would love to have more than the 76 individuals we added to the registry last year. We have a lot of individuals even in Iowa right now that need a bone marrow transplant that don’t have a match,” Horton said. “Everybody has bone marrow, but very few people realize that there’s a need to be put on the list for possible donation.”

Siebenga, along with the other students who participated, wanted to do an event to promote the bone marrow drive because “a lot of people aren’t aware of it.”

Siebenga and the other students hope that the walk raised awareness for the drive and will lead to more people wanting to donate.