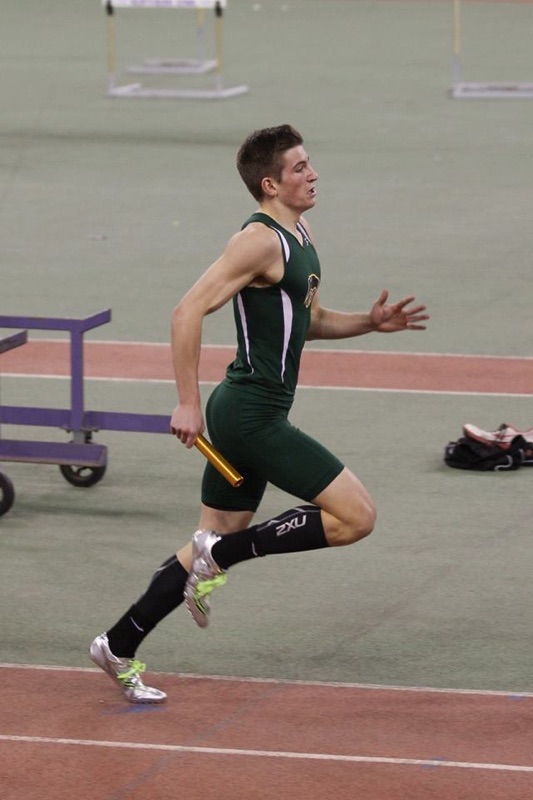 Hunter Schoenauer, sr., sprints in his leg of the relay. Photo by Lori Schoenauer.

The Kennedy Men’s Track team is off to the races. The team has competed in two meets this year so far, and has started off the season with a bang, kind of like the bang of the starting gun at the beginning of every race.

“We’ve only been to two scored meets so far this year, one varsity and one JV. We have won each of the meets by a lot so we’re off to a great start as a team,” Hunter Schoenauer, sr., said.

Mitchell Gaffey, sr., another team leader for the Cougars, said, “So far we’ve had a great start to the season winning our first meet and taking down Linn-Mar which is always a huge plus for everybody.”

The Cougars have been under the direction of a new head coach this season. Curt Pakkebier has been a part of the Kennedy track program for 15 years but this is his first season as the head coach.

“I feel as if we haven’t skipped a beat with him stepping in as head coach. He loves the sport and he knows what we need to do in order to meet our goals as a team and personally,” Gaffey said.

Pakkebier, Gaffey and Schoenauer have high hopes for the team this season.

“As a team we want to first off win our conference meet and hopefully win districts again this year. To end the season we want to finish state with a top three finish and maybe even bring home a state championship,” Gaffey said. “Personally, I want to qualify in multiple events for the state meet whether it’s single events or relays. I want to place in the top eight to score points for the team.”

Schoenauer agrees, “I’d like to see our team win as many meets as possible this year, whether it be varsity, JV or freshmen and sophomore, as well as place top eight at the state meet this year. Individually, I’d like to qualify for the drake relays for a few events and place in the top eight at state for four events.”

Although the team is very capable of reaching these goals, they have some doubts after losing many key teammates from last season.

“We lost quite a bit of talent from last year, about five guys in particular that really helped us place well at state but I think our guys have really stepped it up and were able to fill in for them, as well as improve in other areas that we haven’t been as strong in the past,” Schoenauer said.

The Cougars plan to come together as team, and overcome the many hurdles in their way to be successful.

“We lost some key guys last year and a lot of people doubted us and thought that would hurt us but we’ve had underclassmen and others step up to take their spots. It will definitely be an exciting year and I’m really looking forward to see what’s in store for us,” Gaffey said. “It’s a team sport and everyone’s got each other’s back so I know in the end things will fall into place.”