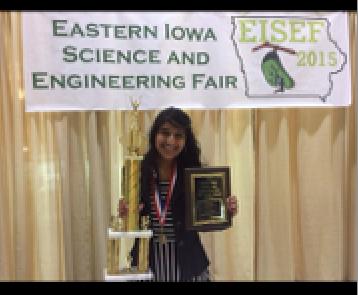 The Regional Eastern Iowa Science and Engineering Fair was held on March 21 at Lindale Mall. Junior, Sweta Sudhir made her first appearance at the fair and came out with a victory.

The process is long and complex. Judges went around to over 60 students from the region and interviewed them about their project. Projects needed to fit into one of the two categories; biological or physical. Then the judges picked 5 students from each category to go into the finalist round. The finalist round consisted of a 20 minutes interview with three expert judges.

“The interview was a very rigorous process where they asked you very detailed questions,” Sudhir said.

Based on the interviews, the judges then picked one group project and one individual project to go to the Intel International Science and Engineering Fair in Pittsburgh Pennsylvania. This will be held from May 10 to May 15.

Sudhir earned a spot in the international fair with her project.

The international fair is deemed an opportunity to more than 1,700 high school students from over 70 countries, regions, and territories and are awarded the opportunity to present their independent research.

To prepare for regional and the international fair, Sudhir had to go through a complex research system.

“I work with Dr. Tina Tootle in a lab in the University of Iowa and she has been instrumental throughout this process. Every time I have a new draft she’s the one that brings it back with all the red marks and tells me how to improve and she has been very supportive,” Sudhir said. ”I usually work in the lab 3 hours every weekend to work on my project and help her with whatever she needs.”

Sudhir created a project based on a protein in the nucleus of cells.

“I am trying to better understand a protein called Actin and it’s role in the nucleus of cells. There have been some studies that have shown that people with Huntington’s and Alzheimer’s disease have more of this protein than other people, and I was just trying to get a better understanding of how this protein is manipulated,” Sudhir said.

Actin is the most abundant protein in all of your cells and it helps with muscle contraction.

“Learning how to do the research to write a scientific paper and explain what might seem like complex scientific things in a more understandable way has been amazing,” Sudhir said.

It is a big honor to be apart of the Intel International Science and Engineering Fair and Sudhir has big hopes for the future.

“I am interested in going to a four year undergrad school and after that I’m hoping to go to med school. This science fair has really opened up a lot of opportunities,” Sudhir said.