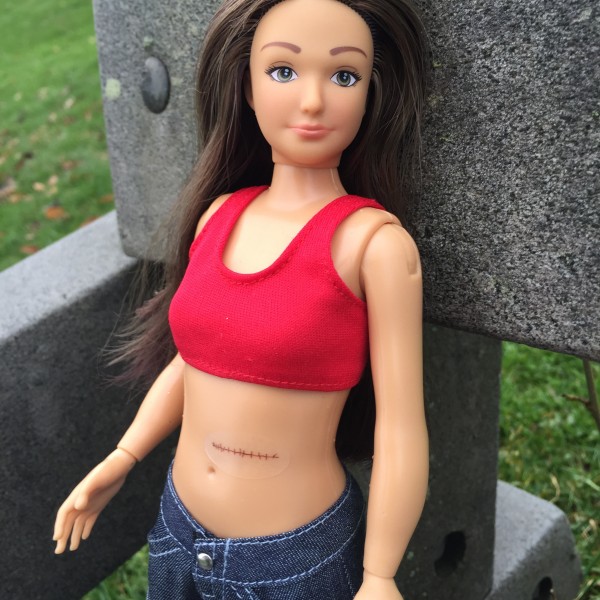 Move over Barbie, the next it-girl has arrived, and she’s on a mission to prove that being pretty doesn’t mean being perfect.

But who could this brunette bombshell be? … Meet Lammily.

Lammily, unlike Barbie, has brown hair, wears little make-up and comes with a customizable sticker pack, containing common traits such as cellulite, freckles and acne.

The man behind what has been deemed “Anti-Barbie”, is Pittsburgh-based artist and researcher Nickolay Lamm.

“I wanted to show that reality is cool,” Lamm said. “And a lot of toys make kids go into fantasy, but why don’t they show real life is cool? It’s not perfect, but it’s really all we have. And that’s awesome.”

Parents, women and people everywhere are overjoyed by the creation of  Lammily, saying things such as “it’s about time”, and “I can’t believe no one thought of this sooner.”

Even celebrities such as Demi Lovato are thrilled by this new fashion icon that they have been waiting for, for years. The singer tweeted  back in 2013:”Also, Barbie should make dolls with cellulite!!! Hahaha!!! After all, around 95% of ALL women have it!!”

While it seems that the majority of people are in favor of this new, average, doll, others, such as Ravishly.com writer Nikki Gloudeman, are outraged over the idea of someone trying to replace Barbie.

Gloudemans post read: “If this doll were real, she would fit right into the pages of Cosmo, or on a Fashion Week catwalk. This is not a ‘normal’ doll; this is a skinny doll that’s not quite as skinny as Barbie. Sticking a scar sticker on her sexy midriff as a way to make her seem even more ‘normal’ is an offensive and insincere stab at body positivity that hasn’t been earned.”

Aimee Ermer, jr., is one of the people who just doesn’t really have a strong opinion on the matter.

“By now it’s common knowledge that the original Barbie isn’t a true representation of a normal body; therefore I think young girls’ perspectives aren’t affected too much,” Ermer said, “I think a majority of girls probably understand that Barbie is just a doll they can play with and not an actual human being that they would desire to be.”

While it is highly unlikely that Lammily will have the international success of the reigning  “Queen,” Barbie, her creator, is hopeful that Lammily can make a statement and stir up a buzz.

“This is the doll people have been waiting for,” Lamm said, “stretch marks and all”.

To read more about Lammily, you can visit http://time.com/3593968/the-new-normal-barbie-comes-with-an-average-womans-proportions-and-cellulite-sticker-extension-packs/