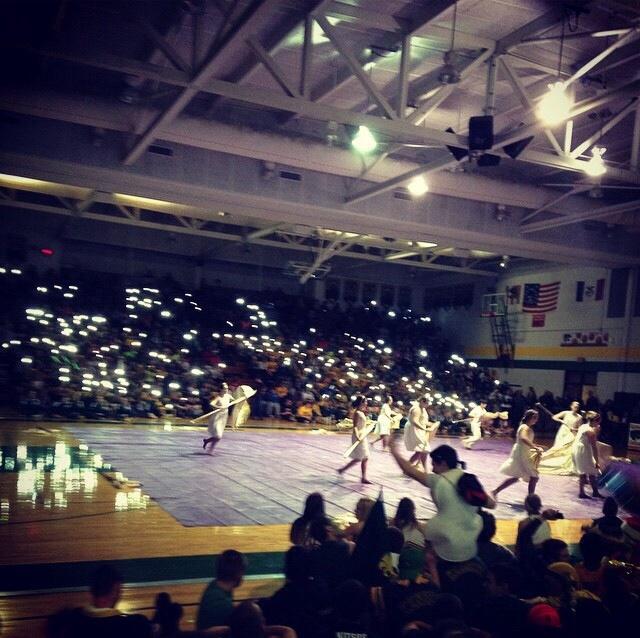 The Kennedy Winter Guard will soon be wrapping up their 2014-2015 competition season. They competed at State in Des Moines just as the Kennedy Dance Team did. Though it may not normally get a lot of attention, ever since the winter pep assembly, pictures of the Winter Guard’s performance have been floating around Kennedy’s social media pool. This may leave people wondering “What is Winter Guard?”

If you’ve ever been to a varsity football game at Kennedy, you’ve most likely seen the marching band perform and this includes the color guard. The color guard is known as the visual aid to the music aesthetics. Winter guard is exactly like color guard, but without the restrictions of marching or worrying about the band. This usually means more dance work and more difficult flag work. Winter guard member, Christi Shauger (so.) says she joined winter guard because she enjoyed doing color guard in the fall and wanted to further her skills for the 2015-2016 season.

Though some may not see it as a sport, winter guard takes a lot of endurance and teaches valuable skills like any other highly involved extra-curricular would. Shauger explains it teaches time management, as their practices are long and frequent. Team work is another thing Shauger says she learned from guard. “You have to work well with your team members because it doesn’t matter if your flag is the only one on time, it matters that your flags all go together”. Lastly she explains, like any other sport or activity it requires perseverance because it may take a hundred times trying a toss before you catch it just right.

With their popularity on the rise since their winter pep assembly debut, we hope to see more of them in the future as well as be able to fully appreciate their performance. In conclusion, though winter guard may not have as large of a following as basketball, it is equally as trying and hopefully isn’t going away any time soon.