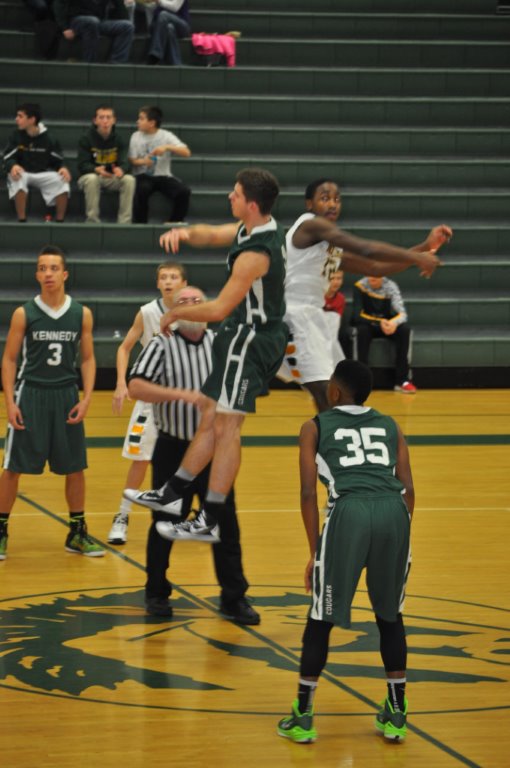 The Kennedy Cougar sophomores met the Dubuque Hempstead Mustangs last night for a classic conference show down. The Mustangs, one of the taller teams the Cougars will meet, shot the 3-point ball well and made the majority of their free throws.

Turnovers hurt the Cougars, as well as shots that wouldn’t drop in the basket. Top scorers for the Cougars were Nick Duehr with 15 points, Malik Haynes with 13 points, and Carter Krall with 6 points.

Also racking up 6 points was Derrick Diggins, one of two freshmen playing up on the Cougar sophomore team. In the end the Mustangs took home the win with a final score of Mustangs 55, Cougars 50. The loss brings the Cougars to a current record of 3-2.

The boys will be in action again tonight at 5 PM as they face off against the Solon Spartans at home.

The Cougar varsity team out-hustled a good Mustang team. The Mustangs were missing their starting guard, which became a disadvantage to them in the end.

Brendon Manning sparked the Cougars in the first half with his hustle and inside play. Manning also contributed to the win with 8 rebounds and 6 assists. At half, Manning had 17 points and led the Cougars at the end with 25 points.

Cole Murdock played a nice game as the floor general and ended the night with 19 points, along with his contribution of 7 assists. Bryton Heisler got hot from the 3 pt land in the 2nd half and ended with 18 points. The Cougars went on to defeat the Mustangs 83-76, bringing them to their current season record of 4-1. Check out the Cougars tonight at 7 PM as they take on Solon at home.