Gone with 20 Seconds to Spare 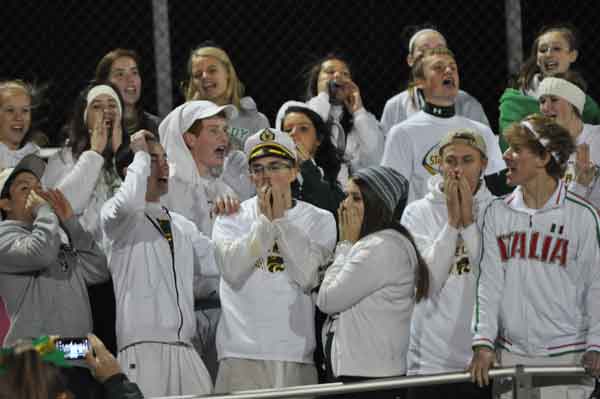 Student section vanishes with 20 seconds left on the clock at the playoff game Monday night.

Associate Principal Jim Muench stated that it all started at half time when individuals in the front row were making extremely unmentionable vulgar comments to the female trainers on the other football team, who had come over to refill ice buckets and water for our teammates. From there the administrators had to go warn the student section that, “this behavior would not be tolerated and if there was anything more they would be sent out,” Muench said.

“The student section was not being rowdy at all, we had way less people in the stands and honestly weren’t even cheering loud,” Erica Gouchee, jr., said.

Most students say they were forced to leave because of one school chant while administration says different. “The whole student section got kicked out of the game last night for doing a cheer we do at every single game,” said Gouchee.

“What I understood is that we did the ‘Ball Sac’ cheer like normal and Muench told us to knock it off and then he pulled out his phone and told us to do it again, so we did and then he kicked us out and told us all he captured it on video,” Chloe Weaver,  jr., said.

“I saw a few football players turn around, and the parents all looked over at the student section,” Meredith Lloyd, jr., said. Lloyd is a cheerleader at the football games. The cheer has always been deemed inappropriate and is not school approved and often is put to an end to when kids begin it, but this time was different.

“To be honest I laughed, I thought the cheer was funny and the fact that they said it three times without someone saying something to them was strange,” said Austin Kerska, jr., a member of the football team. It was unusual for the administration to wait so long to stop the cheer as it had already begun, not to mention let it replay three times.

“I realize what we did probably wasn’t appropriate but he should cut the seniors some slack since it was their last game,” Weaver said. Parents of the crowd began to cheer against administration as well chanting “let them stay, let them stay,” Weaver said. Parents were high fiving the students as they left the game and criticizing the school administrators saying “this is why they have no spirit.”

“Towards the end of the game there was a changeover in downs and some students organized a group and had given me a heads up they were going to do something. I was pretty surprised, I was shocked. I didn’t know, I thought they were joking and then the chant started which is again inappropriate, we have never allowed that type of cheer or chant  and it will never be allowed, first time I told them to knock it off but they proceeded to do it again as I was standing there looking at them directly,” Muench said.