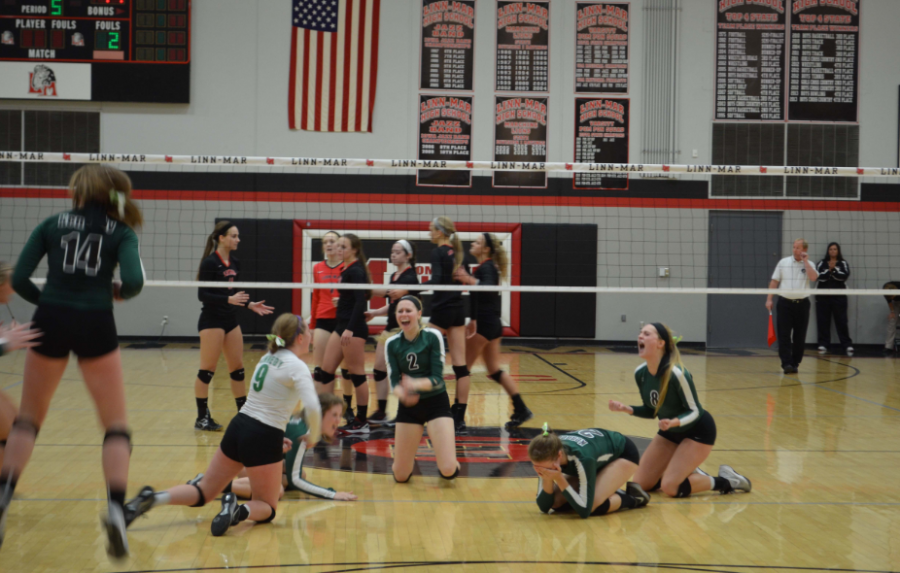 Linn-Mar High’s gymnasium was packed with fans tonight as the Cougars took on the Lions in the volleyball semifinals. The tension built more and more as the teams traded points, each team moving ahead of the other, only to be passed again as the points went back and forth.

In an incredibly close five game match, the women of Kennedy defeated the Lions three games to two. At the beginning of the third game, Linn-Mar led two games to none, having scored 25-23 and 28-26.  However, Kennedy would make a comeback, and scored 25-23 in both the third and fourth games.

The fans could barely contain themselves as the fifth game began; the Cougars with one of the largest student sections the volleyball team has seen all year, and the Lions with their own student section there to respond to each cheer Kennedy did.

At the end of the game, as the referee blew his whistle to signal Kennedy’s scoring of its 15th point, the Cougar players and fans alike lost their minds. The team instantly launched into loud, excited celebration, as the students stormed the floor.

Next stop: Newton, Tuesday night, to take on the winner of Roosevelt vs. Dowling, taking place on this same night.

“I’m just really proud of them, they showed great game tonight,” Michelle Goodall, the Kennedy head coach, said. “I think coming up from behind is a good experience for them, because even if they’re down two games, they’ll know they can still win.”