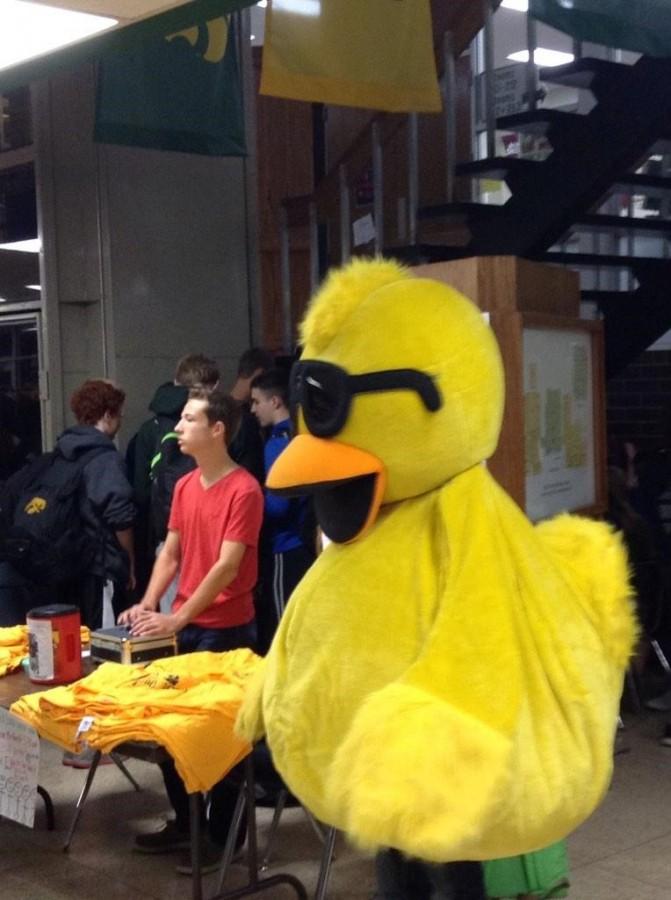 The largest game of duck duck goose in the world, so far consists of 2,135 people.

Kennedy is aiming to break that record tonight at the Kennedy vs. Linn-Mar game. It will be from 6 p.m. to 7 p.m. between the sophomore and varsity games at the Kingston Stadium track.

The Guiness Book of World Records reports that the largest game of duck, duck, goose involved 2,135 participants at an event  at a Logan-Rogersville High School in Rogersville, Missouri, on Oct. 7, 2011.

To break the world record teacher Dan Carolin, head of this event, hopes to see at least 2,500 people. The participation is free, but donations are accepted, and will be given to the One Campaign.

“We want everybody to know about it,” Carolin said. “We want everyone to come down and be a part of this event.”

During the fourth quarter of the game people will be ushered from the stands on to the track. The game will be played in a “zig-zag” or “sign-weave” formation. About 25 people in each diagonal will alternate the diagonals around the inside 400 meters of the track, so there’s enough room for the person tagged to run.

To prove that this record-breaking event is completely honest Carolin must film the entire event at every entry point leading to the track. He also must have an aerial view of the whole thing, and put it all on DVD. Once this is done the DVD is sent off to the Guinness World Records office in London, England.

The planning of this massive event originated one day last year when Kennedy’s fire alarms went off and everyone had to evacuate.

“We were out there for a long time and students were getting kind of restless,” Carolin said.  “I was thinking wouldn’t it be a great to have a big game of duck duck goose like out in the horse shoe while we’re waiting to come back in the building.”

The students entered the building before anyone was able to play the game, but that didn’t stop Carolin. He decided to plan the event this year, and make it into something much more than just a game.

“We decided that we would do this as a big fundraiser for the One Campaign,” he said. With so many people attending, he thought it was a great way to raise money.

While coordinating a world record-breaking event there’s a lot to be considered, like the work and planning that goes into it.

“It’s way more complicated than I thought it was going to be,” Carolin said. With so much to do many people have stepped up to the challenge. “I have numerous students and teachers helping me out.”