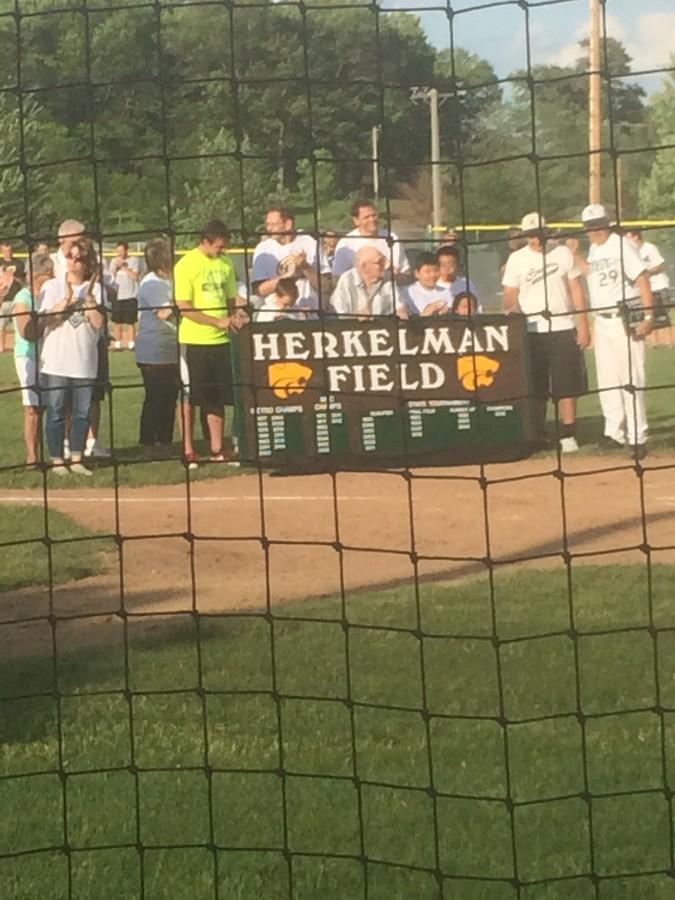 Coach Bill Herkelman and family honored with the naming of field.

The Kennedy baseball team swept No. 2 Iowa City West with a score of 1-0 for both games on Monday, June 2.

“Former players will come to our games when we travel to their town just to visit with Coach Herk and shake his hand before the game,” Rich Patterson said, “Herk means that much to his players past and present.” Patterson presented Herkelman with a plaque officially naming Kennedy’s baseball field, Herkelman field.

“We can’t really ask for a better start to our season, getting the metro title was a great way to start our season and it really gave us a lot of confidence,” Parker Fifield, sr., said, “Then to sweep a very good Iowa City West team and on Coach Herk’s big night was also tremendous. We now hope to build off those wins and to continue to get better.”

Many people came out for the season opener to support the Metro tournament champions, as well as Herkelman and his family as they were honored by the naming of the field.

“There are just people who have an impact on young people in a school, culture and community that is just so huge, it’s just important that it’s never forgotten,” Athletic Director Aaron Stecker said, “To have an opportunity to name a baseball field that is something that means so much to Coach Herk, that he was such a huge part of building, is just a way of saying we are never going to forget the impact you have had on this program and were not going to have anyone else who comes after us forget it either.”

Players past and present lined the infield as Coach Herkelman was being awarded while many devoted Herkelman and Kennedy baseball fans cheered him on from the bleachers.

“I think he was very surprised by how many people came out and supported the cause, it’s an honor to be involved in such a big night,” Ben Sass, sr., said.

The idea of naming the field after Coach Herkelman was brought up by a former player, “Matt Novak is a graduate who first approached me a few years ago about seeing what we could do, he’s the guy that deserves the most credit for getting the ball rolling,” Head Coach Bret Hoyer said.

All it took was one former player to have an idea and soon enough with a new backstop, and a season opener game at home, and the whole Cougar Baseball family was on board.

“He has devoted many, many years to Kennedy’s baseball program and he represents everything that cougar baseball is all about,” Sass said.