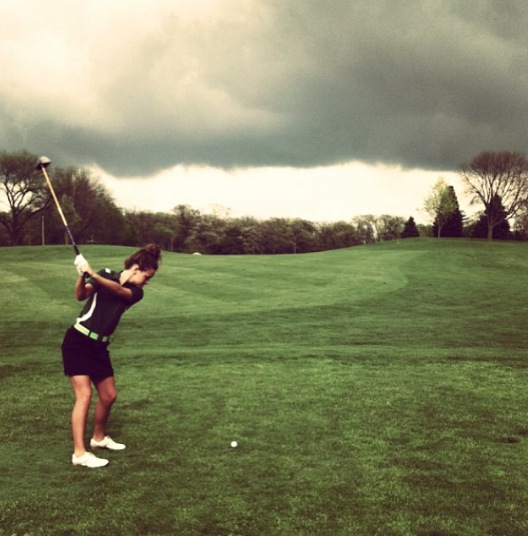 The Kennedy Women’s Golf Team is just starting up with their 2014 season. The first practice was held on Monday March 17 in head coach Julie Bush’s classroom.

29 girls signed up for the team this year, which is a bigger turnout than usual.

“I’m just excited for all the potential, all the girls have been working on their game over the winter and just to see where they’ve come too,” Bush said.

Of those 29 players, ten are currently taking lessons and were working on their game and swings in the off-season.  Most of the lessons take place at Elmcrest Country Club.

“There’s been some of us that have been taking lessons and it will definitely help us improve in the long run,” Breanna Osterkamp, jr., said.

With a lot of new girls the team, the returners are expected to lead by example.

“I’m excited about becoming closer to the girls and getting better as a team,” Osterkamp said.

The players won’t practice outside until the beginning of April because of weather conditions. In the meantime, practice will be held indoors.

“To prepare we are going to focus a lot on our short game which is putting and chipping,” Bush said.

The team’s first meet will be on April 8 in Dubuque.

“We have a lot more people on the team this year so that will be different,” Bush said. “Last year we had one player that was a lot better than the rest and this year we are more of an even paying field so it will be fun.”

In late March the season will start to wrap up, as the state meet will be held on June 2 and 3.

“I think the season will go very good, we have a lot of new girls coming out and a lot of potential,” Bush said.