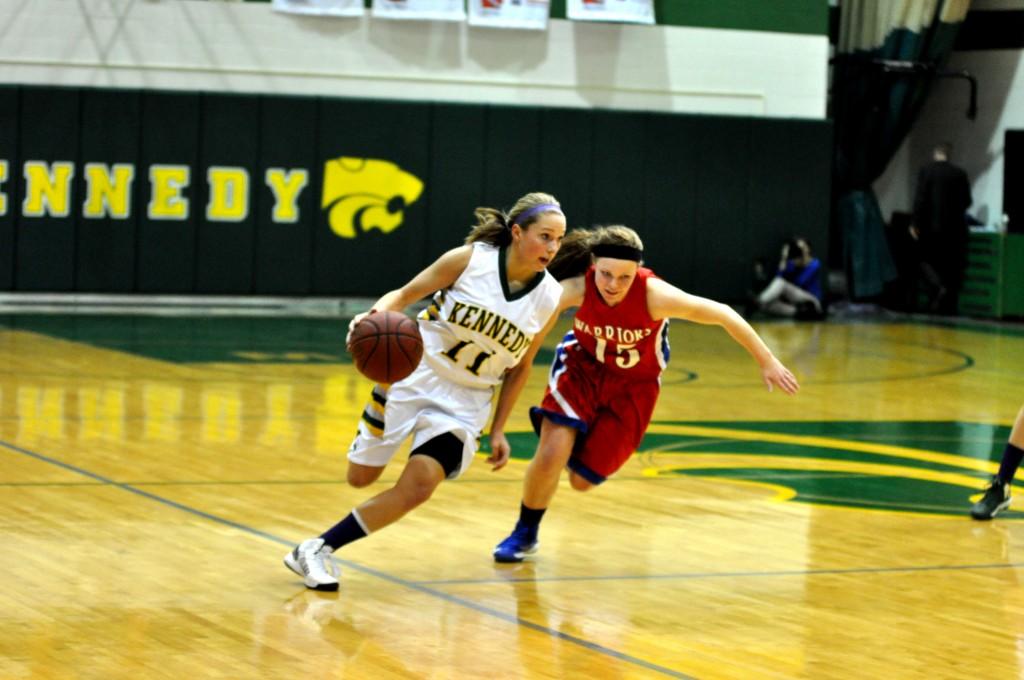 Jordan Holmes 14' drives the ball to the basket against Washington

The Kennedy Girls Basketball team finished their season in Des Moines at the Wells Fargo Center in the state tournament. Even though they didn’t make it to be state champions, everyone on the team agrees that they accomplished a lot.

“We ended where we wanted to, at the beginning of the season we all knew we wanted to be at the state tournament, and obviously we wanted to win it but I think that just getting there was a big accomplishment and along the way we definitely hit some bumps that we would have preferred not to have but I think they made us stronger and eventually helped us to get where we ended,” Stephanie Botkin, jr., said.

The Kennedy Girls ended the season with a winning record of 16 wins and eight loses.

“We overcame a lot of things, I’d say we improved a lot through out the season. We beat some teams that we weren’t supposed to beat, we were the under dogs and that’s a great accomplishment for us,” Jordan Holmes, sr., said.

With the games leading up to the state tournament the team lost three straight times. These loses were all close games with the point spread being twelve points or less.

“When we did have our three bumps with our three game losing streak in the regular season, everybody thought that we weren’t going to make it to our regional final and when we did everyone thought Muscatine was going to beat us, but we overcame our three game loosing steak and made it to state,” Paige Hendrickson, sr., said.

The Cougars overcame these three regular season ending loses and beat Cedar Rapids Prairie in the first round of sub state 46-31.

After that it was on to Iowa City, to face Muscatine for a chance at the state tournament.

“I’d say beating Muscatine to go to state was one of the best feelings ever,” Holmes said.

And just like that the Cougars pulled out another win, beating Muscatine 54-52 to make it to the state tournament.

“Honestly, I just loved being with these girls and I wouldn’t trade our team for anything, the group as a whole was the best just being with them,” Botkin said.

The team chemistry and the sense of family within the team, is what they believed carried them this far.

“With some sports you’re team mates but with our basketball team we are all sisters, on and off the court it was like a party to us, it was a great experience, and we loved going to practice maybe not just because of the practice but because we could be around each other,” Hendrickson said.

Next season is another chance for the Cougars to redeem themselves in the state tournament. Despite loosing nine seniors, Botkin believes in her team.

“I think since we had so many sophomores this year, whether they got to dress with us or play this year, them getting that experience is going to help us out a lot next year, our whole conference is definitely loosing a lot and yeah our team is loosing a lot of good players but every other team is loosing just as much I think having the sophomores will help us a lot, its still a great group of girls so I’m looking forward to having fun with them,” Botkin said.