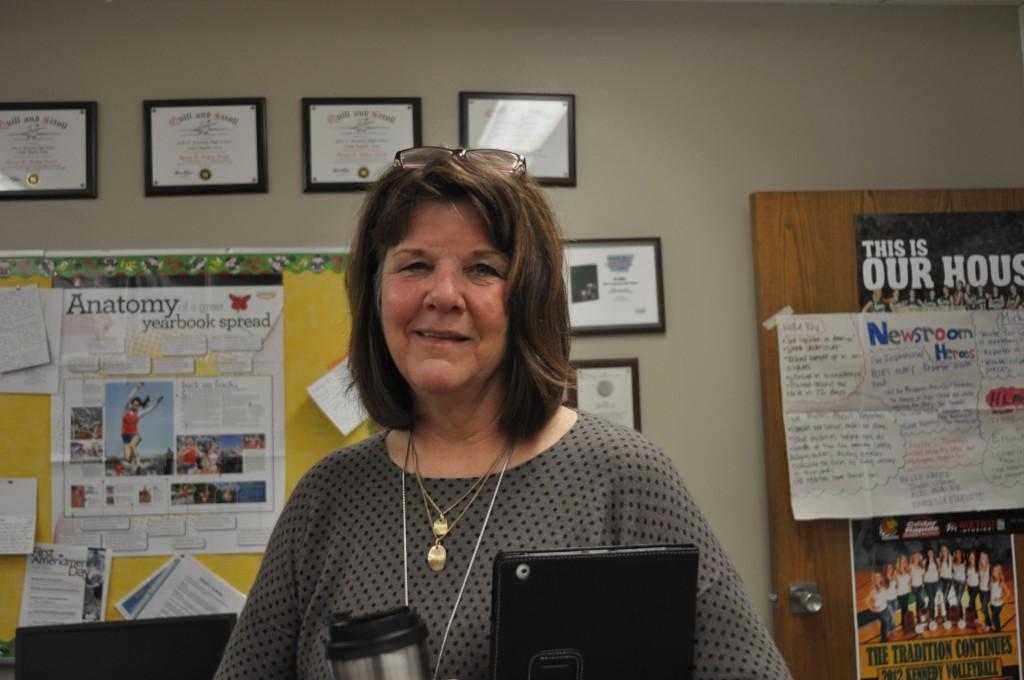 Dr. Mary Wilcynski, principal,- "Absolutely not, it's not going to solve the issues of gun control and mental health issues, arming teachers is not, in my opinion, the way to go about that."

Kennedy High School is proud to announce our Class of 2014 Hall of Fame Inductees.  There will be an induction ceremony in the Kennedy cafeteria on Friday, February 14th, starting at 5:00 pm.  The honorees will then be introduced between the sophomore and varsity boys’ basketball game Friday night versus Linn-Mar.  These individuals have had a remarkable influence on the rich tradition of our school and our athletic programs and we are excited to honor them Friday night.

Ellie (Blankenship) Reagan – Ellie is a 2007 graduate of Kennedy High School.  She was a three-sport athlete for the Cougars, competing in volleyball, basketball, and tennis.  Ellie earned 2nd team all-State honors in volleyball her senior season, was a member of the 2007 state champion tennis team, and was a two-time doubles state qualifier.  She was named Kennedy’s female Senior Athlete of the Year in 2007.  Ellie continued her volleyball career at UNI where she earned 3rd team all-American status and MVC Libero of the Year in 2010.  She was also named the Lowe’s Senior CLASS award winner as the NCAA Division I Senior Student-Athlete of the Year.  Following UNI, Ellie was a member of the USA Volleyball women’s national team in 2011, playing for legendary USA volleyball icons Hugh McCutcheon and Karch Kiraly.  She also played professionally in for VC-Triol in Innsbruck, Austria, from August to May, 2012.

Jade Grimm – Jade is a member of the Class of 2009.  At Kennedy, Jade was an exceptional soccer player who achieved the highest of honors and accolades, both individually and as a member of some tremendous teams on the pitch.  Her Kennedy teams appeared in the state championship finals in all four of her seasons, finishing runner-up three times and capping an undefeated season with a state championship her senior year in 2009.  Jade was a three time elite all-state soccer player and was named the Gatorade Player of the Year twice, in 2007 and 2009.  She was named to the NSCAA High School All-American team and was listed as one of the top 100 players in the Nation.  She was named Kennedy’s female Senior Athlete of the Year in 2009.  She continued her career at the University of Iowa, earning spots on the Big Ten all-freshman team and the Big Ten all-tournament team her senior year.  She was a multiple year Big Ten all-academic team selection.

Amy Wold – Amy is a 2004 graduate of Kennedy High School.  Wold was a two-sport athlete for the Cougars, competing in in softball and basketball.  She was a four-year letter winner on the softball diamond as a center fielder, earning first team all-conference her junior season in 2003.  Wold was the leader of an undefeated regular season basketball team during her senior season in 2003-2004.  The team went 21-0 that year and qualified for the state tournament.  Amy was named first team all-state in both her junior and senior seasons, and she was named the MVC Player of the Year and Iowa Prep Report Class 4A Player of the Year following her senior campaign.  She continued her career for the Kirkwood and was part of a 4th place and National runner-up team for the Eagles.  She transferred to Saint Joseph’s in Philadelphia following Kirkwood where she was named the team’s most improved player her senior season.

Alan Feickert – Alan is a member of the Class of 1990.  He was a three-sport athlete for the Cougars, earning six varsity letters in his junior and senior years while playing football, basketball, and baseball.  In the summer, Feickert played second base and was Kennedy’s point guard on the hardwood.  The gridiron is where he excelled as an athlete, playing wide receiver and defensive back.  He earned all-MVC and 3rd team all-state honors his senior season.  He finished his career with a school and MVC single season record of 49 receptions.  He also set school marks with 682 yards receiving in a season and 11 receptions in a game.  Alan was tied for the school career receptions record with 69 and receiving yardage in a career with 1007 yards.  Feickert continued his football career at Central College in Pella and was a three-year letter winner for the Dutch.

Ryan Prahm – Ryan is a 1997 graduate of Kennedy High School.  During his years as a Cougar, he participated in four different sports – wrestling, football, basketball, and baseball.  On the hardwood, Prahm averaged nearly a double-double on a team that finished in 4th place at the state tournament.  Prahm shined on the mound for the Cougar Baseball program.  He was a three-year letter winner, earned 2nd team all-state honors after his junior season, and 1st team all-state honors after his senior campaign.  In a storied history of pitchers for Kennedy, Prahm ranks second in both season and career strike outs per inning pitched.  He is fourth all-time in total strike outs with 230, and is eighth all-time in career ERA at 1.80.  Prahm attended the University of Iowa and continued his baseball career for the Hawkeyes.  He earned academic all-Big Ten honors in 2000.  He signed a minor league contract with the Cleveland Indians as a draft eligible sophomore in August of 2000.  In 2004, he was the Carolina league All-Star closer with the Kinston Indians.  Ryan finished his minor league pitching career with a career ERA of 2.92.

Joe Slaton – Joe is a member of the Class of 2005.  As a Cougar, he focused his athletic efforts on the sport of wrestling and turned those efforts into one of the more remarkable careers of Kennedy wrestling.  Between 2002 and 2005, Slaton compiled an overall career record of 165 wins and 11 losses, including a perfect season of 43-0 in his senior campaign.  He was the first Kennedy wrestler to be a four-time state finalist and was the first freshman to make it to the finals in school history.  He was state runner up in his freshman and sophomore seasons in 2002 and 2003 and was a two-time state champion in 2004 and 2005.  Joe finished with career school records in takedowns (437), near falls (179), tech falls (31), and wins (165).  Slaton first attended Virginia Tech in 2005-2006, wrestling for Tom Brands.  In 2006, he followed Brands back to the University of Iowa and Hawkeye Wrestling.  During his collegiate career, he posted a record of 97-15, earning all-American honors as a Hawkeye.  During the 2007-2008 season, Slaton won the prestigious Midlands Championship at 133 pounds, compiled a 31-5 record, and finished as runner-up at the NCAA wrestling championships.

David Winkler – David was a teacher and coach at Kennedy High School from 1968 through 2002.  During his decades as a Cougar, he taught numerous science courses and disciplines and coached the Kennedy girls’ tennis program during its infancy and developmental years from 1971 through 1978.  Winkler took over the Kennedy girls’ tennis program in 1971 in its’ fifth season of existence.  The team finished 1-11 in his first season at the helm, but improved dramatically during his seven seasons, finishing 10-2 in his final two years as the coach.  In 1978, Holly Walkup was the first Kennedy player to make it to the state tournament as an individual.  During the 1976 tennis season, Kennedy High School and Coach Winkler hosted the State tennis tournament.  Winkler’s most memorable moments of coaching still include the process involved in getting athletes to improve in their skill and their level of play over the course of season and their career.

Dr. Mary Wilcynski – Wilcynski’s entire professional career was spent in the Cedar Rapids Schools.  She started as a counselor at Arthur Elementary School in 1975 and taught at Metro High School from 1978 to 1997, serving as a language arts teacher and counselor, moving into the role of lead teacher in 1982 and principal in 1985.  In January of 1997, Mary became the principal of Kennedy High School, a position she held until her retirement in June of 2013.  She was one of the first women in Iowa to be named the educational leader of a large, comprehensive high school.  During her tenure, Kennedy has become recognized as one of the best high schools in Iowa, the Midwest, and the Nation.  The school has been on lists as one of the best high schools in publications like US News, US News and World Report, the Washington Post, and Newsweek every year since 2005.  In her final year, US News and World Report named Kennedy High School as the Best High School in Iowa.

There is no place Dr. W would rather be on a Tuesday or Friday night or Saturday afternoon than a Cougar event, other than those of her own children.  She loves the excitement and energy that comes with high school students and high school sports and fine arts.  A typical Saturday could include lower level games at Kennedy in the morning, speech or music contests in Davenport in the afternoon, capped off by a varsity game Saturday evening back in the Cougar Den.  She knew every athlete and every performer.  She mentored our coaches and challenged them to keep getting better so they could increase their positive impact on our students.  She counseled our parents through those tough times when things just did not seem to be going right for their students – in the classroom, on the field, or on the stage.

***Note – Ken Terukina – long-time Booster Club President and Kennedy parent was selected for induction with the Class of 2014.  Ken has had family obligations come up and was unable to attend this year’s induction and celebration.  We will be officially inducting Ken into the Hall of Fame next year, when he and his family can attend and Ken will be present for the much deserved recognition for his many contributions and efforts for Kennedy Athletics.