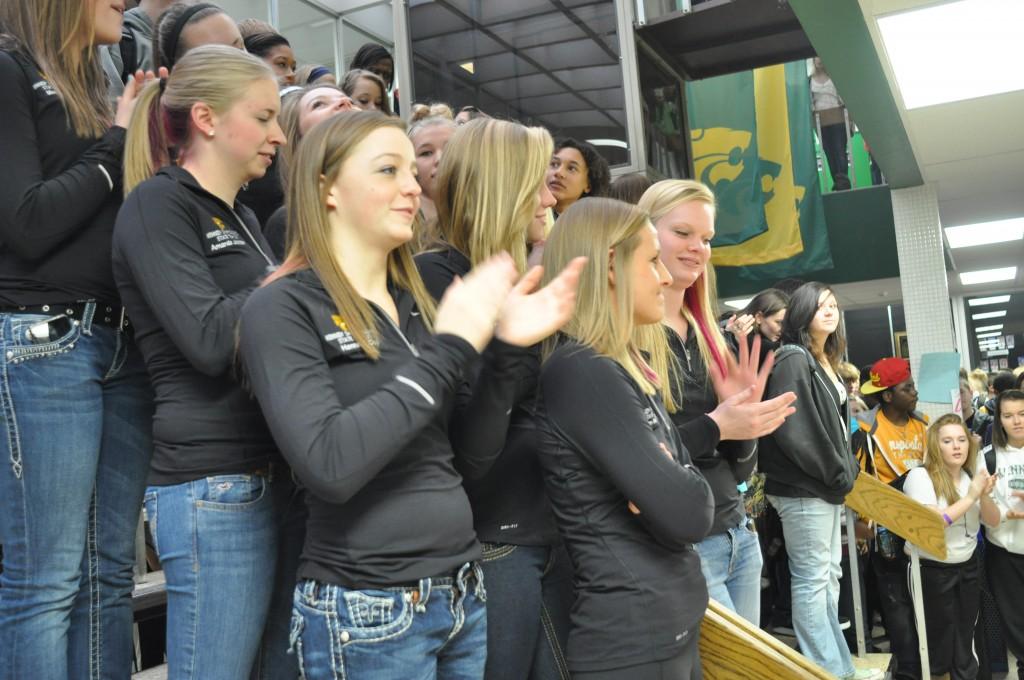 State swimmers were cheered in the front foyer Nov. 4. The Kennedy band, students, and teachers gathered to send the swimmers to the state meet in Marshalltown.

The Kennedy girls’ swim team is celebrating a successful run at regionals. The team came out of the meet with the name regional champions. The meet was on November 9 and 10 at the Mercer Aquatic Center.

“To prepare for regionals we tapered, which is when we cut down our yardage, have shorter practices and we don’t lift weights as much. We take advantage of a lot more rest to be more prepared than any other meet,” Hannah Botkin, sr., said.

The Cougars qualified for ten out of twelve events for state at regionals.  The state meet was held this weekend in Marshalltown. Diving began Friday at 5 p.m. Followed by the swimming finals which began on Saturday at noon.

“Hopefully state will go even better than regionals, sometimes its hard to carry on the energy from regionals to the next week but hopefully we will be able to do that,” Botkin said.

“We’re ramping up the yards again at the beginning of the week and then tapering them down at the end of the week. We’re just really working on technique to get ready for state,” Samantha Jacobsen, jr., said.

A total of eight swimmers will participate in the state meet. Botkin and Jacobsen are included in the state team. Accompanying them are three alternates and a manager.

For senior’s, this will be their last meet with the Kennedy Swim Team.

“As I reach those last milestones, like the last meet in the Kennedy pool, my last time wearing my team suit, my last morning practices with the girls, it’s sad but I just think state will be an exciting end to my past four years here,” Botkin said.

“The journey has been really fun, it’s been a team effort.  I couldn’t do it without those girls, my team, or Coach JR, and it’s just been really exciting,” Jacobsen said.