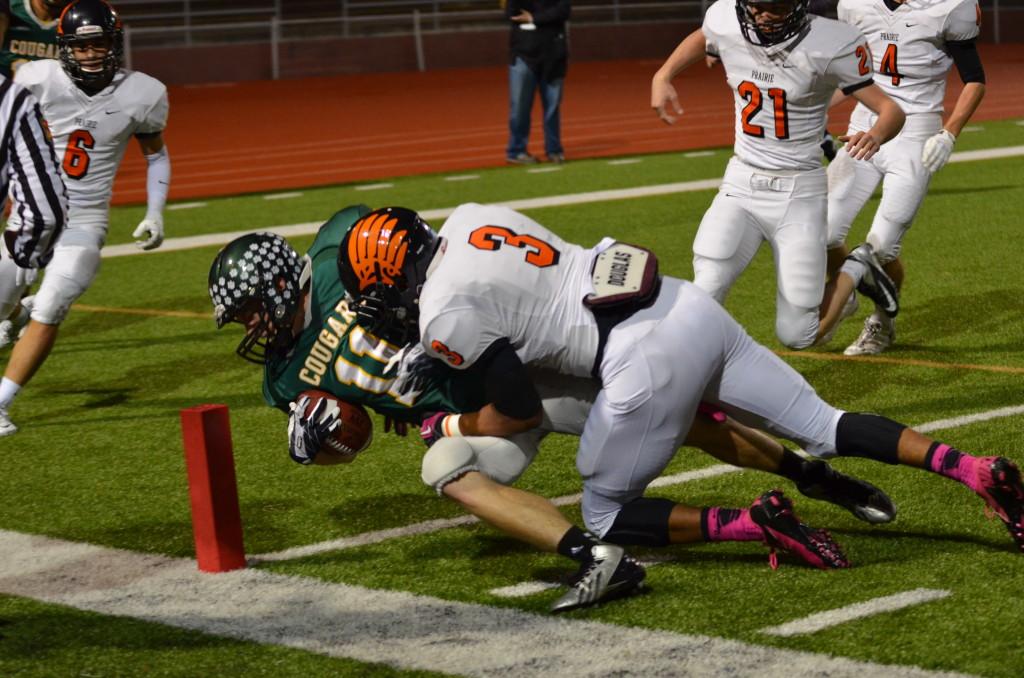 Stop me if you’ve heard this before.

A physical Kennedy football come out and out muscles the other team en route to a win.

Kennedy did just that as they upset second ranked Davenport Assumption 35-12 in the second round of the playoffs on Monday night. The win punches Kennedy’s ticket into the quarterfinals and a rematch with 42nd street rival Xavier.

“We came out really slow but we got it turned around,” senior quarterback Derek Jacobus said. “We moved the ball well in the second quarter and gave our defense some breathing room.”

Miles Moa ran for 184 yards on 30 carries and quarterback Derek Jacobus ran for three touchdowns behind another impressive showing from the Cougar O-line.

“We just did our job. We did our assignments and we did everything we were coached to do,” Austin Holzer senior tackle said. “We just wore them down in the second half and it opened up the big plays.”

Kennedy snuck past Assumption in this one, literally. Davenport Assumption struggled to stop a quarterback sneak which lead to big plays for the offense.

“They left the sneak open,” Jacobus said. “They didn’t put anybody in the A gap, we just blew off the ball. It really worked there.”

Kennedy came out on their first drive and were forced to punt to Assumption quarterback Jake Gervase, who is getting recruited by several division one colleges. He took the punt 80 yards to set up a Assumption touchdown to give them a 6-0 lead.

Kennedy marched right back down the field and scored on a two yard bootleg from Jacobus which gave them a 7-6 advantage.

Gervase led Assumption down the field again and threw a touchdown pass this time to give Assumption a 12-7 lead.

Then the Cougars took over.

After a solid kick return from Jacob Shannon, Kennedy capitalized on the field position. Moa punched it in from six yards out to give Kennedy a 14-12 lead.

Backup quarterback Sammy Lizarragga was pressed into action when Jacobus was forces to sit out a play because his helmet was ripped off during the play. Lizarragga came in and scored on a sneak from one yard out.

After halftime Kennedy just wore down Assumption as they were just unable to play physical with the Cougars.

Jacobus scored twice in the fourth quarter to put away the Knights.