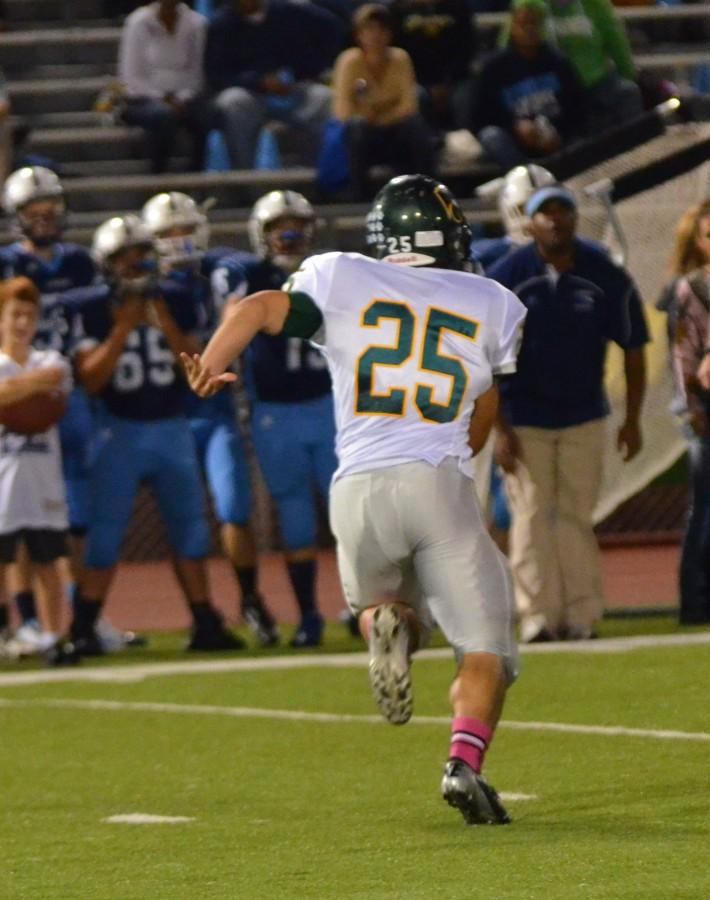 It’s no secret what the Cougar football team is going to do offensively, they are going to run it and run it some more.

Kennedy toppled Jefferson 35-14 on Friday and racked up 358 yards on the ground to improve to 4-2 on the season and virtually clinch a playoff berth.

“A win’s a win. This was ugly, we’re happy we won the game but there’s a lot of things that we’re disappointed with,” Head Coach Tim Lewis said. “You always got things to learn.”

Jefferson elected to receive to start the game but turned it over on their first offensive possession as Logan Daughetee sr., picked off Jefferson quarterback Layne Sullivan sr., off a deflection from junior linebacker Terrence Hall.

“Terrence knocked the ball in the air and it was pretty much right,” Daughette said. “The whole defense played well.”

“[Daughette] just keeps getting better,” Lewis said. “He and Jake Shannon sr., both are really solid corners. There both having nice seasons and we have a lot of confidence in them.”

The Cougars didn’t take long to capitalize on the mistake as Miles Moa sr., ran for a 29 yard score on their first play offensively. Kennedy took a 7-0 lead and never looked back.

“We got a lot of confidence in our stacked I formation and we got two tight ends we feel really good about,” Lewis said.

After a blocked field goal Kennedy marched the ball right down the field on a 10 play 94 yard drive which ended with a Derek Jacobus sr., 26 yard scramble to put the Cougars up 14-0.

Kennedy opened up the second half with another touchdown run from Moa, this time running for 31 yards to put the Cougars up 21-0.

The J-hawks weren’t going to go down without a fight though as Layne Sullivan got the J-hawks on the board with a five yard touchdown pass but the J-hawk defense couldn’t do anything to stop Kennedy’s ground and pound offense as Moa broke off another huge touchdown run, this time running for 49 yards to give Kennedy a 28-7 lead.

Jefferson still showed some life in the second quarter as Sullivan connected with Bryce Lund jr., to make it a two possession game in the fourth quarter.

Terrence Hall sealed the game as he scored late in the fourth on a one yard run.

Kennedy squares off with Waterloo East this Thursday at home. Kickoff is set for 7:15 p.m.