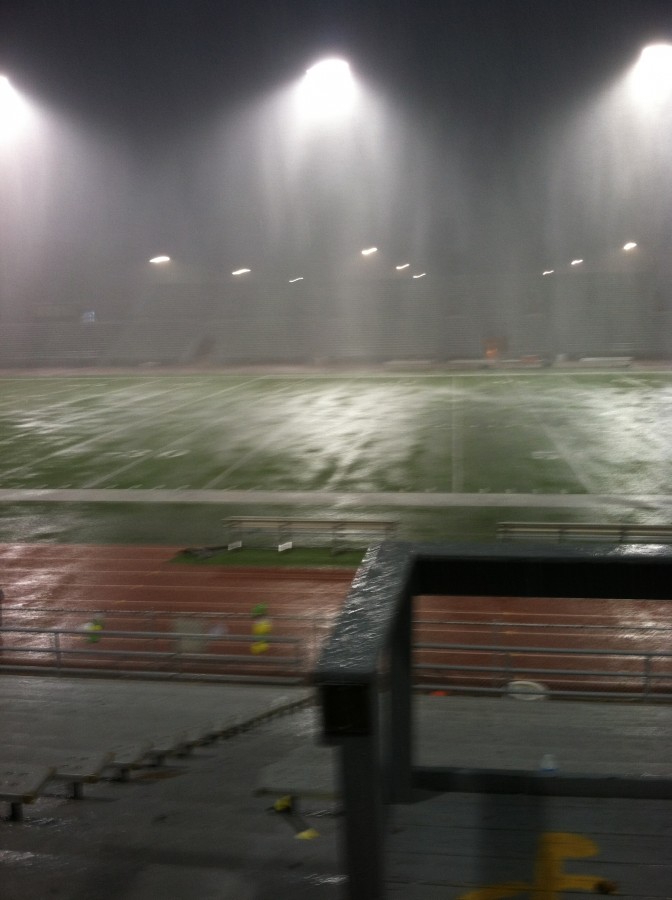 For hours the Cougar football team didn’t know whether or not they would play on Thursday night because of a major storm that swept through Kingston stadium.

The game was eventually played, but not until 8:40 p.m. but the Cougars were ready to go as they defeated Dubuque Senior 19-9 to improve to 3-1 on the season.

“We didn’t have a lot of structure in the locker room,” Head Coach Tim Lewis said. The game was delayed one hour and 35 minutes. “We just let the kids sit and listen to the music and some of them were out watching the storm. I told the kids yesterday that we just had to be ready foreverything.”

Miles Moa., jolted the Cougar offense in the first with a 21 yard run to set up Logan Wedo for a six yard touchdown run to give the Cougars a 6-0 lead.

After a pretty lackluster second quarter, senior A.J. Carter came up big. Dubuque Senior lined up to attempt a 42 yard field goal but the kick was left short. The ball fell around the five yard line where Carter picked it up and scampered up field.

“He took a chance and it ended up working out. Had it not worked out he would be in the doghouse right now,” Lewis said.

After all was said and done Carter ended up breaking off a 74 yard run to set up Derek Jacobus., for a touchdown run, giving them a 12-0 lead.

Senior added a safety to put them on the board before halftime, but the Cougar defense was flat out dominate in the first half holding the Rams to negative five rushing yards.

Kennedy padded their lead to 19-2 in the second half when Jacobus connected with senior Drew Heitland on a 14 yard pass. “It was pretty lucky, Derek found me when I was open,” Heitland said.

Next week Kennedy squares off with 42nd street rival Xavier, who currently sits at number one in the state. “We got to keep some consistent drives going and defensively we just got to keep getting better. They’re going to run the ball at us and throw it enough to keep us honest,” Lewis said.

Kickoff is scheduled for 7:15 p.m. on Friday at Kingston.