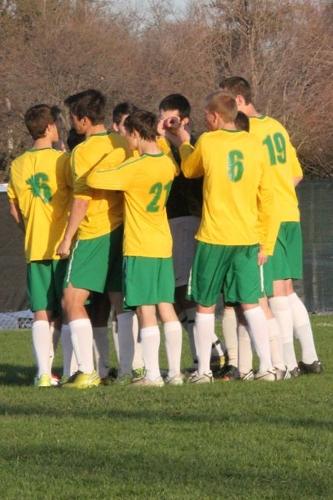 The Kennedy boys’ soccer team is springing into action this spring. The boys’ have started the season off right with a record of 10 wins and no loses. The team lost nine varsity players from the 2012 season but has not let that stop them.
“At the beginning of this year I didn’t expect to come out and win all these games, so I’m really satisfied with the way our team is playing right now and how we have done so far this season,” Ryan Walker, so., said.
JJ Reinhart, jr., agrees but thinks there is still room for the team to improve.
In the ten games that have been played Kennedy has gone into PK shootouts for four of those games. A PK shootout consists of each team trading off shots for a one on one with the goal keeper. A PK shootout happens only after two ten minute over times ending with the score still being tied.
Kennedy works hard to make sure they are prepared for this stressful situation at game time.
“At the end of every practice, we line up and before we leave and we each have to kick three PKs,” Walker said.
In all four of these games that went into a shootout, Kennedy has been successful.
“That credit mainly goes to our kickers and Norm Althoff,” Reinhart said. Althoff, jr., is the goal keeper for Kennedy and has had a very successful season with the Cougars.
The Cougars are continuing to practice hard to keep up there winning record.
“The coaches usually have something they want us to focus on in practice each day, depending on how we performed in our previous game, so if we are bad at finishing in one game the next practice we work on shooting,” Walker said.
The Cougars main goal for their season is to win state.
“Hopefully we win state, and continue to improve game by game,” Reinhart said.