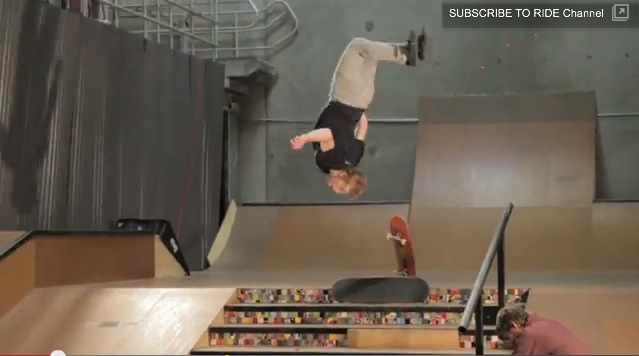 Coming from a high school with only 350 people to receiving more than 2,587,866 views on YouTube Adam Miller sets a skateboarding first by gainer back flipping off of one moving skateboard, down six stairs, onto another board at the bottom of the stairs.

Miller has been skating for six and a half years now but also was involved in gymnastics and competitive cheerleading for four years. “I was in Iowa Elite Cheer for four years and won three co-ed nationals in Orlando Florida my last year.”

Miller has been making skate videos with his friends for a few years in different local skate parks such as Riverside skate park, until Tony Hawk picked him up. Miller had been sending his tricks to many people and Hawk being one of them. In 2012 Hawk made a YouTube channel called RIDE and Miller was asked to do a trick for it.

Miller met the team down in San Diego to shoot his trick. While attempting this trick Miller bruised his hip, sprained his wrist, hyperextended his knee and tore a lot of skin off of his arms but said it was definitely worth it.  The day he did the trick he had many professional skaters watching including Tony Hawk, Chris Halsem, Killian Martin, and Tom Schaar. After succeeding in the trick they posted the video to get over 2 million views. Already having so many views Miller was featured on Good Morning America as the “Play of the Day”. “I spent two days trying it at another spot and then when it rained in San Diego we decided to go inside and try it there and it only took about seven tries” miller said over Skype.  Not only was Miller on GMA but TMZ, the local news and many articles on and offline as well.

Though this story has been posted many times all over the nation something people don’t know is that Adam actually has a lot more hobbies than skateboarding. “I am in choir at my school, I enjoy theater, I snowboard, and I play the guitar” said Miller.

Miller says he is working towards finishing up a local skate video with Mike Duthler sometime this summer and hopefully keep skating and having fun.