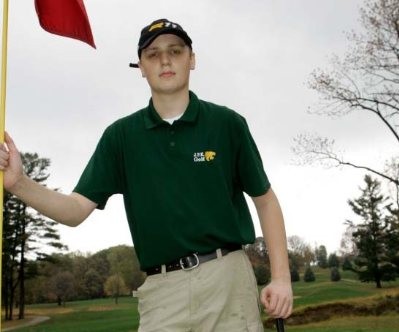 It will be quite a sight to see a “sea of purple” in the stands this Friday, Dec. 14 when Kennedy High School and Washington High School put their differences aside. They will come together for one purpose, to remember Drew Wall.

In support of Wall, this Friday will not be a “typical game day”. At the Kennedy vs. Washington basketball game (held at Kennedy High School): all students, staff, players, spectators, and coaches will be wearing purple in support of Wall. Purple is the color that represents cancer, so this Friday will be a “purple out”. The boys’ and girls’ basketball teams will all be wearing purple “Just Drew It” t-shirts for warm-ups and purple Nike socks for the game.

If you were not familiar with Drew, he was a sophomore here at Kennedy High School. He was diagnosed with metastatic osteoblastic sarcoma, a form of bone cancer, at age 11. He then made the life changing decision to have his leg amputated.

Wall wore a bionic leg with pride and loved to show others how it worked. He owned four different legs and had a blade running attachment that he could change out with a wrench. Wall was known to tell pretty funny stories about how he lost his leg. Although he loved joking around, he was also known to be very humble.

As a young boy he played basketball and baseball, and after he lost his leg, he found other sports and different ways to contribute. On his prosthetic, Wall achieved a brown belt in Taekwando, was on the Swim Team at Taft Middle School, and helped manage the Kennedy Swim Team his freshman year.

Most recently he was a member of the Kennedy Golf team and helped inspire his teammates to a runner-up finish at State this fall. Wall also had a love for the Iowa Hawkeyes. In addition, Wall had above a 4.0 his freshman and sophomore year of highschool.

Wall passed away peacefully in his home on November 26, 2012, surrounded by his family.

Coach Fontana also stated that the game means a great deal to him and his team. “For someone that was so young to have to go through what he and his family did, is such a sad situation. But at the same time I think that young man accomplished so much in 16 years that he is to be commended for that and so is his family. He is a source of inspiration to everybody on our team,” Coach Fontana said.

“He is an inspiration to all of us,” Ben Struss, sr., said. Struss is one of many students who felt this way about Drew.

No doubt the energy in the gym this Friday will be radiating and will hopefully rub off onto the players. Kennedy hopes to take the “W” for Wall, but regardless of the outcome, we are all there for a good reason. Both sides the same, coming together for one cause-supporting and remembering the one and only, Drew Wall.