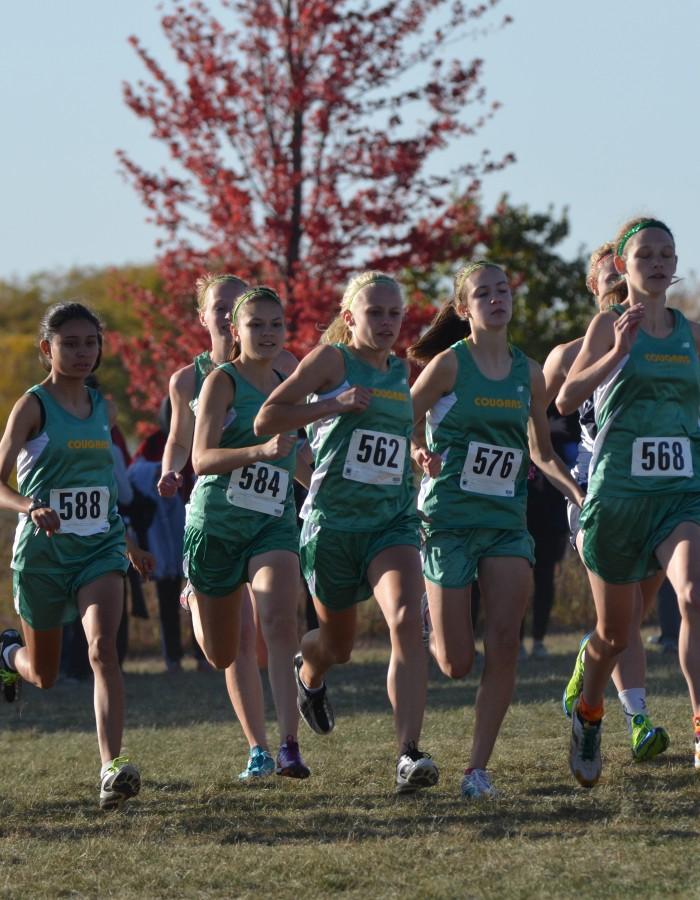 The Kennedy Girls’ Cross Country team began winning races at the start of the season and they haven’t stopped. The team finished the regular season with a record of six wins and no loses and placed second in the Mississippi Valley Conference meet. They won their first district meet on Oct 18. On Saturday, Oct. 27 they will run in the state meet in Fort Dodge. The Cougars are ranked second in the Class 4A rankings.

“It’s kind of a surprise at how well we are doing, since last year we weren’t doing very well,” Lauren Meyer, so., said.

The Cougars were ranked 12th the previous year, and 15th the year before that.

Kennedy has four dominant runners. These four lead the pack every time, Katie Womple, sr., Alyssa Averhoff, jr., Allison Culver, jr., and Lauren Meyer so. These four runners have placed in the top 15 of every meet so far. Behind these four top runners however, is a strong team.

All of the runners are proud of their accomplishments this season and agree that they did not expect to do this well.

Coach Jensen started practice for the team the first week of August. Since then the team has been working hard to achieve their goals. They have put lots of hard work into this season and they believe this has made them successful. Their daily practice consists of a one or two mile warm up followed by about an average of six miles.

“We’ve been running a lot and training a lot harder,” Averhoff said.

Jensen has prepared the team well for their competition.

“We are working hard every day, we have a plan that we stick to,” Jensen said, “Everything we do everyday is trying to make us faster.”

Running a race is a mental game. You need to be focused in order to win. Practice prepares the team as a whole but an individual has to do their own mental preparation for their race.

“I make sure I eat lots of carbs and get good sleep. I have to be focused before the race and warm up well,” Meyer said.

“I usually try to relax myself, and think about what I have to do but I don’t over think it to the point that I stress myself out,” Katie Womple, sr., said.

The Cougars have many goals for the rest of the season and plan to continue working hard to achieve these. A goal from the team would be to place in the top three at the state meet.

“There’s still a lot of work to be done,” Womple said.