Saying farewell to a legacy 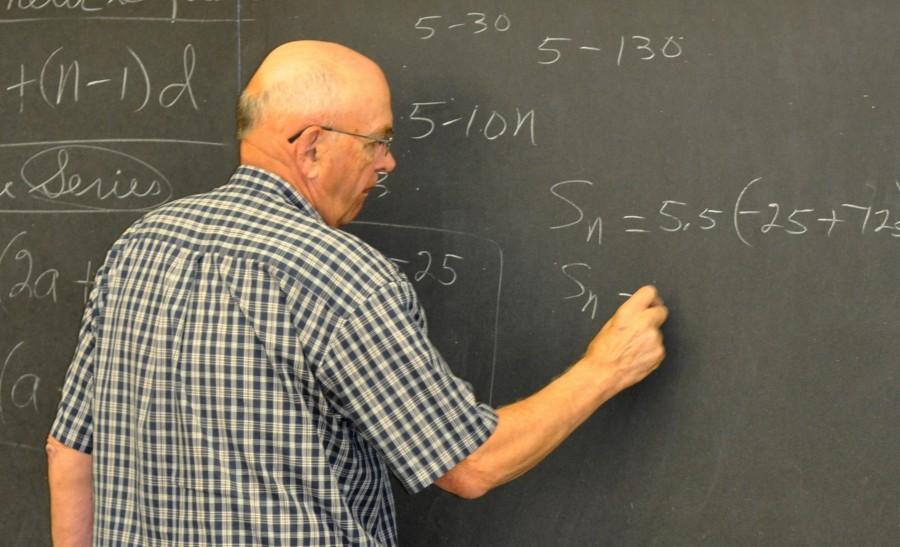 After teaching nearly 7500 students over the course of 52 years, Bill Herkelman, Kennedy math teacher, will retire from teaching at the end of the 2011-2012 school year.

Herkelman is the only remaining staff member who has taught at Kennedy since its establishment in 1967. He has taught various math classes as well as coaching baseball, basketball, and football.

Herkelman decided to retire about a month ago. “There wasn’t any specific thing that said ‘Oh, I’m going to quit,’” he said. “It was something that I knew eventually had to come and I’m 74 and it’s time.” Herkelman has been teaching for 52 years.

“During the summer it won’t seem like retirement because I have summers off. Retirement won’t hit me until next August when school starts,” Herkelman said. He is looking forward to working in his yard and attending sports games, however he will miss interacting daily with his students. Herkelman estimates that he has taught over 7500 students.

Herkelman grew up in Elwood, Iowa where he attended a high school of 50 students. When he was younger he wanted to be a major league baseball player. “I always said I would’ve given my two little fingers if I could’ve played in the major leagues,” Herkelman said.

Instead, he attended the Iowa State Teacher’s College (now the University of Northern Iowa) majoring in math and physical education. “I thought eventually I would become a coach and I liked math so I thought that would be a good combination,” Herkelman said.

Herkelman coached sophomore baseball and basketball during Kennedy’s early years and was the head baseball coach from 1977 to 1992. He also coached football at various times. In 2003 he became an assistant baseball coach under head coach Bret Hoyer. He is planning on continuing to volunteer as assistant coach after he retires. “It’ll keep me busy during the summer,” Herkelman said.

In 2003 Herkelman’s wife of 42 years passed away. She had had cancer for five years and had endured eight major surgeries. However, on Dec. 14, 2011 Herkelman married Kennedy special education teacher Kristine Howser. They enjoy attending University of Iowa sports games. “I miss my first wife and I think about her everyday but Kris is very good about that,” Herkelman said. “She understands.” Herkelman’s marriage did not affect his decision to retire.

Over the course of his lifetime, Herkelman gained a true passion for teaching. “It’s been a nice gradual increase until I realized, ‘Boy, I really like this,’” Herkelman said. “I really enjoy it and I hope the students enjoy it.” Herkelman said one of his main goals is to make his students feel comfortable in his classroom. “I think it’s really important when you come in there that you think, ‘Oh, this is going to be alright,’” he said.