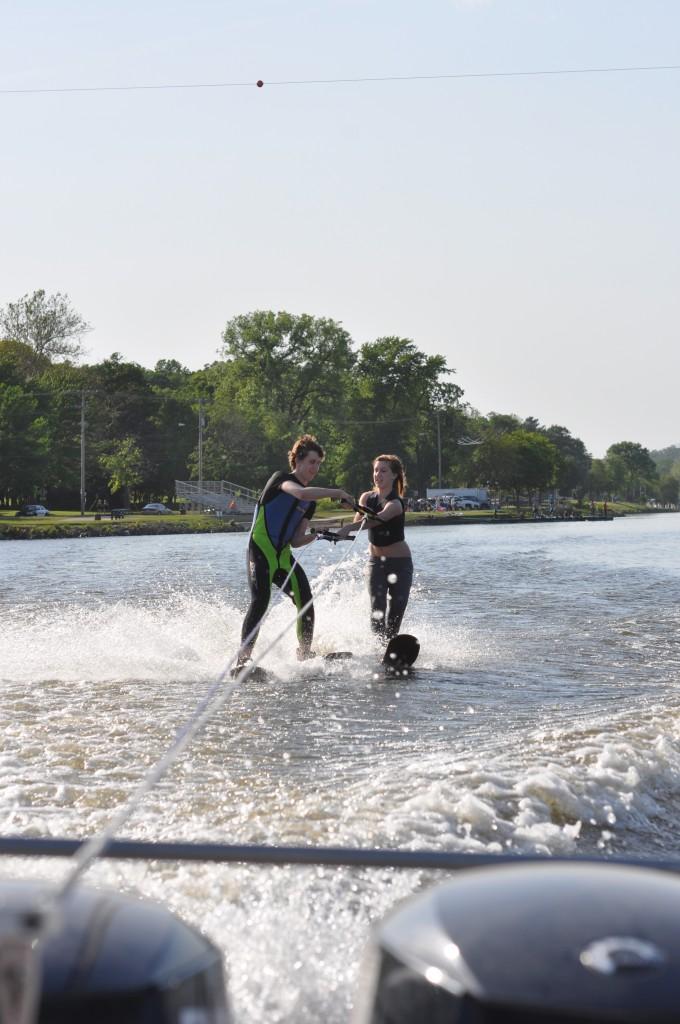 Adam and Kylie Goldberg use their teamwork to trade off their ropes.

Adam Parker-Goldberg, jr., and sister Kylie Parker-Goldberg, fr., have been a part of the Five Seasons Ski Team for the past ten years. Adam took swimming lessons when he was younger at Ellis pool. After lessons he would walk with his family across the park to watch the ski shows. From watching the shows he decided that he wanted to join the team.

There is no audition process to be on the ski team. It is not even required to know how to water ski. Water skiing skills and tricks to perform on the water are all taught by members of the team to the new incoming members. There is no age limit to members who can be on the team. Currently the age range is 6 to 50 on the team.

Kylie joined the team when she was only six. She started off with simple tricks like sitting on the shoulders of other skiers. Kylie recalls that she was very terrified of doing this skill and would only sit on the shoulders of one female on the team because she was frightened of the male teammates.

Adam and Kylies favorite part of being a part of the ski team is building the pyramids on the water. They are a difficult skill to master and require an immense amount of trust from all teammates.

“We joke because it is the only sport where you start at the top and work your way to the bottom,” Adam said. Last year the Five Seasons Ski Team accomplished a five tiered pyramid on the water. They are one of a select few teams that have been able to master this tricky skill. The pyramids often times are extremely heavy. They need to go up smoothly and come down smoothly and quickly.

According to Kylie, the hardest skill to master is doing jumps off the ramps. She herself has never attempted this this skill but has watched multiple teammates try and try in order to master the skill. She also believes that barefoot skiing is one of the hardest skills.

To Kylie, the scariest part of being on the ski team is the fear of falling. “If you fall forward you can smack skies so that is pretty scary,” Kylie said. But Adam on the other hand is not afraid of falling at all. He is only terrified of the fish. “Whenever I fall I like to get my feet out of the water because the idea of a fish coming and touching me just scares me,” Adam said.

The ski season officially opens on May 1. But in January the team works on building pyramids and practices other skills at the gym. Practices that begin in May run two days a week from 5:30 p.m. till dark. There is also the option of attending ski school on Sundays.

Adam and Kylie are sometimes overwhelmed by trying to balance school, ski practice, and show choir practice. But they love the sport so much that they try not to get stressed out. Practices are not like a normal sport practices. Teammates are able to work on what they need to as well has having a show director, who acts like a coach, tell them what to work on. Practices also have a nice social aspect that Adam and Kylie enjoy. “We love the people,” Kylie said.

Adam and Kylie’s favorite game to play with their teammates is king of the river. All teammates use one ski and are side by side on the water. The object of the game is to knock others off and be the last skier standing. There are many different strategies to the game like using your foot to knock each other off, taking each other’s rope, and forming secret alliances with each other.

In the future, Adam and Kylie hope to continue with the team. Since it is a summer sport they will be able to pick up where they left off after being away at college. They two love the sport immensely and encourage everyone to make it out to Ellis park to watch the ski team on Thursday nights over the summer.