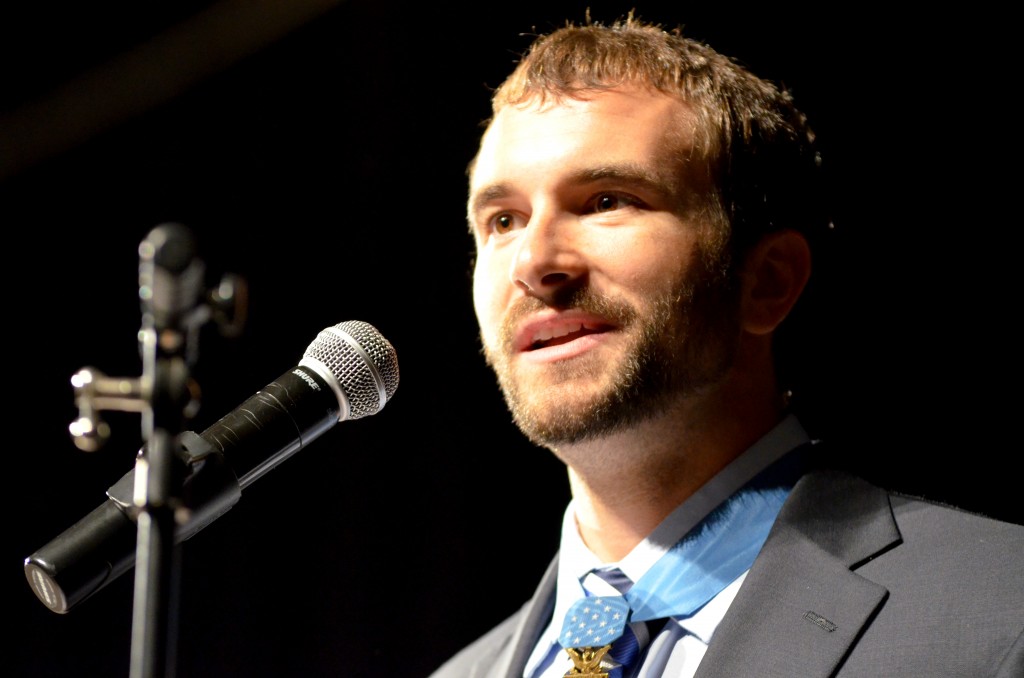 On May 1, National Medal of Honor recipient and Kennedy High School alum, SSG Sal Giunta, returned to his alma mater to present the first “Sal Giunta Scholarship of Honor” to senior Abi Gray. Giunta explained that he selected Gray based on her outstanding application and commitment to community service.

“I was honored to be put in a category under Sal Giunta,” Gray said, noting that she admires Giunta for his humbleness and his attitude of not wanting to be praised for his actions a lot because he believes that was what he was expected to do in his position.

According to Guinta, there were multiple qualified applicants for the scholarship, each impressive academically and with service to the community.

“I would never receive this scholarship,” Guinta shared, with a wide grin. “I wouldn’t even be on the short list for the scholarship.”

“Smart and with a plan and a solid head on their shoulders and a future of helping people are all qualities I looked for,” he added, noting that Gray possessed all of the qualities. “I am really excited to see where she ends up going in the future.”

Although the scholarship is in his name, it is intended as a tribute to the memory of his brothers-in-arms, Sgt. Josh Brennan and Spc. Hugo Mendoza who lost their lives during the Korengal Valley, Afghanistan battle on Oct. 25, 2007. Giunta was honored for his heroic actions with the Congressional Medal of Honor for his actions on this day.

Gray will put the $1,000 scholarship toward her education at Iowa State University; she plans to study either aerospace or electrical engineering and hopes to one day work for an aviation company to do more government specific work. She currently works at Rockwell Collins as a government contract on GPS receivers for the military.

Giunta said he was excited to have the opportunity to return to his hometown to present the scholarship to Gray at Kennedy. “To be able to come back and see some of the same teachers and to walk the same halls and to truly feel still part of Kennedy and still feel part of the community is an awesome thing,” he said.

The new scholarship will be presented annually to a graduating Kennedy senior selected by Guinta.