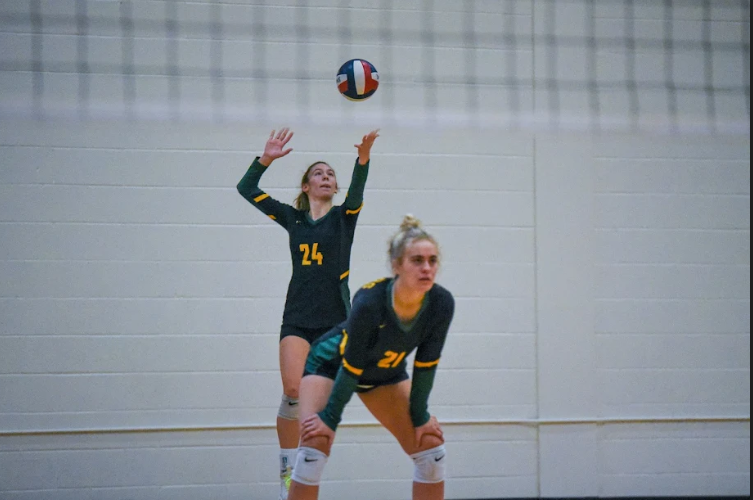 Molly Joyner serves the ball over the net at a varsity volleyball game.

After an encouraging team huddle, senior Molly Joyner scored her final point as a volleyball player at Kennedy. Joyner was named one of two 2022 Female Athletes of the Year, after being on varsity since she was a freshman. Joyner expresses her enthusiasm for being picked.

“I was super excited and was very grateful to be in that position … I was just blown away.”

Despite her high school career ending, her time on the court isn’t over yet. Impressive statistics have led her to continue her academic and athletic career at Stevenson University playing both indoor and beach volleyball.

Not only is Joyner an exceptional volleyball player, she also did well in her track career. She competed in 4×200 meter relay, 4×400 meter relay, 4×100 shuttle hurdle relay and discus at state this year.

Joyner loves her track and volleyball team, she made friends and created many memories over the years. Throughout senior year she balanced her busy schedule of homework, school sports, club volleyball and being a normal teenager girl.

“She has grown  a lot as both an athlete and a student … As a student she has continued to manage her time to be able to work, study and hang out with friends,” her dad, Daniel Joyner, said.

Molly Joyner became a better student, athlete and leader during her time at Kennedy. From the pressure of being a freshman on varsity to earning a spot as valedictorian, her road to success has not been an easy one.

If she missed a practice or someone needed help, Joyner was always up to the challenge. She didn’t let the stress of her life compromise her character and still maintained a bubbly personality.

One of Joyner’s favorite parts of high school was making new connections with coaches. She encourages other students to try new things because if you put the work into it, you can achieve wondrous things.

Joyner’s parents comment on how proud they are of her accomplishments throughout her four years at Kennedy.

“[Daniel and Cindy Joyner] are proud that she is a valedictorian, athlete of the year, qualifying for state in all four events she competed in this year and four year varsity volleyball player.”