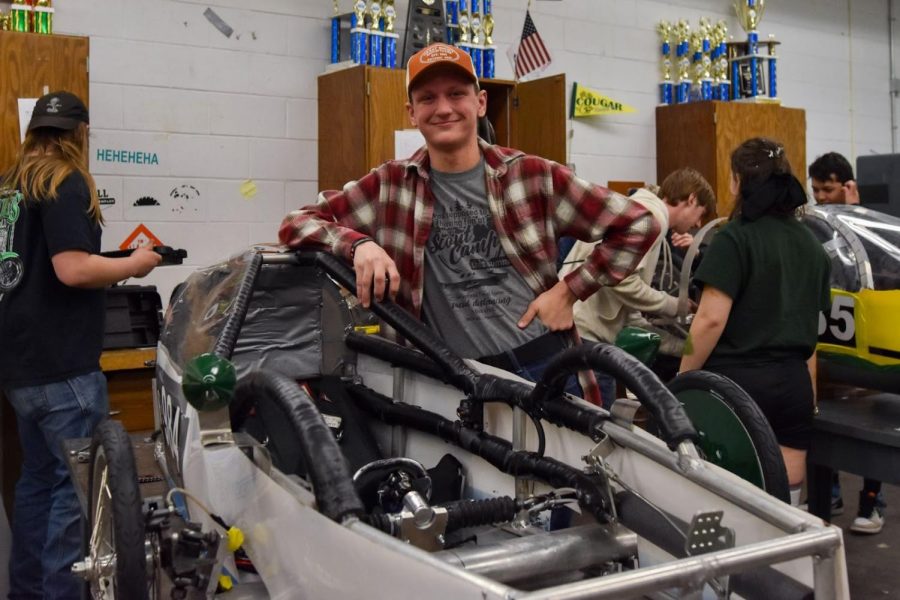 Brian Stubblefield shows off one of the hand-made electric cars in Barry Wilson’s classroom.

Senior Brian Stubblefield was introduced into the world of Electric Car months before his high school career. Stubblefield’s interest set in during open house in eighth grade. His scouting friend suggested that he take a look at student-built cars. With a pamphlet in hand, he headed home.

Electric Car has been around for decades at Kennedy. The program is built upon students who share an interest in engineering and mechanics. Students work together to build an electric car. The program allows students to take a much-needed break from their typical classes and enjoy bringing their ideas to life. Electric cars are built on respect, dedication and most of all, trust.

Stubblefield has been part of the program all four years of high school. 2022 marks the end of his Electric Car career.

Kennedy’s Electric Car adviser, Barry Wilson, has led the program for the past 24 years. Perhaps more interesting is the fact Wilson has been teaching at Kennedy for 50 years.

“Little bit of trouble with concentration once in a while, but otherwise [Stubblefield is] going ninety miles an hour,” Wilson said.

According to Stubblefield, Wilson helps teach new members how to use different types of machinery and tools. He manages funds, drives the group to and from races, advises crew chiefs on car design and much more.

Stubblefield served as a telemetry engineer for Electric Car for two and a half years. Now, he is involved in documentational writing. His work consists of writing a daily report of what is going on in the shop to send to Wisconsin and Nebraska every month. Stubblefield is required to watch each group and keep track of them. These groups consist of graphics, mechanics, electrical and documentational.

Overall, Electric Car has created a lot of memories for Stubblefield. His favorites involve attending and participating in races.

“It’s a bunch of teenagers organizing and running a race at [the] ones we go to,” Stubblefield said, “And it’s a bunch of cars built by teenagers that are flying around a track at 40 miles an hour.”

Kennedy Electric Car has had several opportunities to put on races at larger venues.

“The ones [races] we have put on at Hawkeye Downs and Prairie, we put on every spring, are always really fun,” said Stubblefield.

Although Electric Car has been a big part of Stubblefield’s school career, he wishes to pursue a career as a paramedic at Kirkwood Community College.

“I could see myself, if my current plan doesn’t work out, with electrical engineering. But no, it isn’t my main goal,” Stubblefield said.

As of now, Stubblefield is attending the EMT Academy at Kirkwood Linn Regional Center. In May, he will graduate from the academy and take the next step toward his career as an EMT.