Kennedy’s Key Club Gives Back to the Community 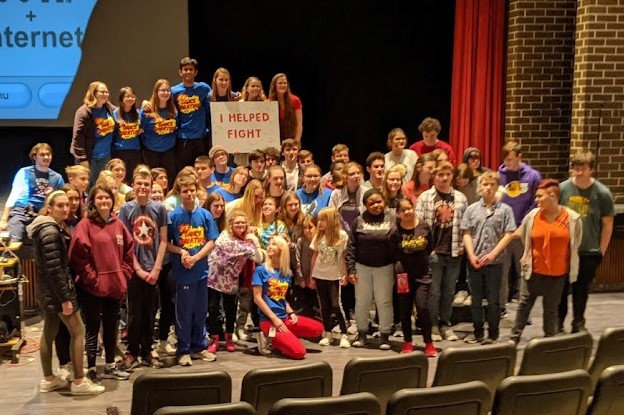 Kennedy’s Key Club is a student-led volunteer program. From caroling and bell ringing to helping set up and organize charity events, students never want for a chance to support local communities.

“I really enjoy helping students find opportunities and create opportunities for them to run fundraisers and events,” said Nekvinda.

Regardless of how busy their schedule is, students are encouraged to participate. Club officers and Nekvinda inform members about possible events taking place. Students can get involved in whatever capacity works best for their schedules.

“If you have a lot of other stuff going on it can be a little thing or, if you want to get more involved, then you can be a bigger part of it too,” said Club Officer Olivia Scott.

Students don’t just support charities; they organize events. The upcoming Mini Dance Marathon is run by members of the Key Club with help from a student from the University of Iowa. The dance is scheduled for April 8 after it was canceled during the 2020-2021 school year.

Every year, a new theme is selected for the Mini Dance Marathon. The theme is usually inspired by the University of Iowa’s Dance Marathon whose theme changes annually as well. The theme determines many of the activities each year. The only activity that remains the same is the Mario Kart tournament. Activities this year include tie-dyeing shirts and giant Jenga.

“I think to be a part of [organizing the Mini Dance Marathon] would be really cool,” said Scott. “Especially because, if people get involved in it in high school, that is a huge thing in college that I know a lot of people love being a part of.”

“Whatever we raise might not have the biggest impact because we’re a small school but it also helps, and it’s nice to give that to those people who are running it,” said Scott.

Organizing the Mini Dance Marathon isn’t easy or cheap. Members raise money through events like bake sales and by selling items like sock grams, but the majority of their money comes from sponsors. Students take on the task of asking businesses directly for sponsorships.

“It’s really hard to get people to take you seriously as a student, so I think it’s really important to always come off professional,” said Scott.

Behaving professionally is only one of the skills members learn through their volunteer work. Kennedy is not the only school that provides students with volunteer opportunities. Several schools collaborate to provide volunteers to charities. While collaborating with others, students develop their cooperation and communication skills.

“We went to a warehouse and it wasn’t just us. It was all different schools and Key Clubs and we built beds for people around the community that don’t have beds,” said senior Key Club Officer Allison Rohrssen.

From volunteering with nationwide charities like Salvation Army to the local Cedar Rapids Hot Cider Hustle 5K and Half Marathon, students are able to positively impact more lives than they could on their own.

While the number of students participating in Key Club is smaller than previous years, students’ passion for helping others has not waned.

“I think volunteering is one of the most important things you can do and learn from it,” said Rohrssen. “The Sleep in Heavenly Peace thing we did, I had no idea that that many people, that many kids, slept without beds around our community, so that was kind of an eye opening experience.”