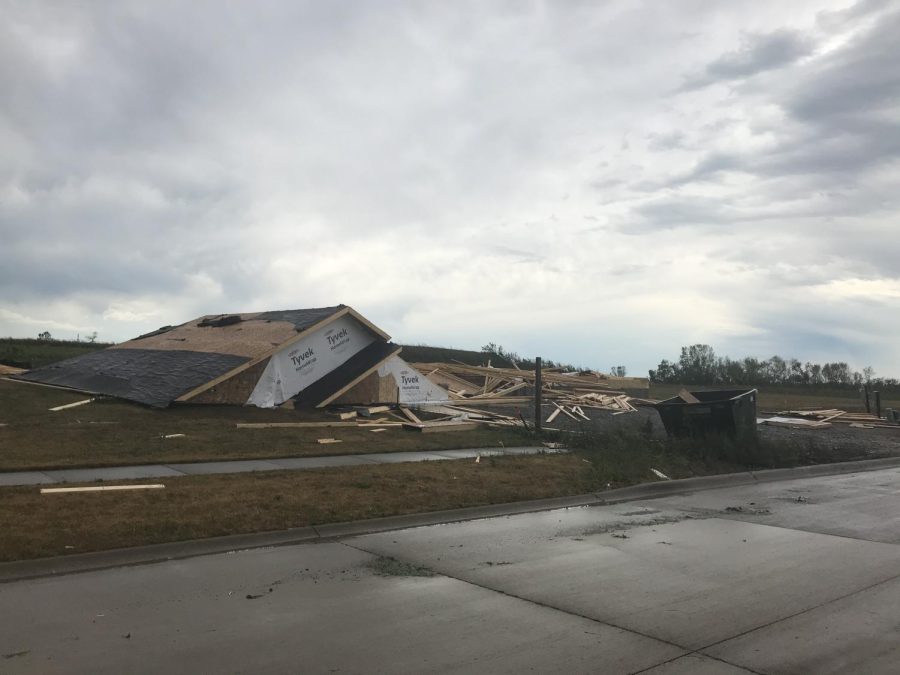 The August 2020 derecho caused mass destruction to nature and property across Iowa.

During the winter months, it may seem odd to talk about climate change. Now is the time to talk about the strange temperature changes more than ever.

Global warming, the rising of Earth’s overall temperature, leads to countless problems that affect everyone and everything on the planet, and is a major effect of climate change. This situation occurs because of the greenhouse effect. The greenhouse effect happens when emissions from burnt fossil fuels are trapped in the atmosphere, increasing the overall temperature of the Earth. It creates an effect similar to how a greenhouse traps heat inside an enclosed space, which leads to the rise in temperature.

Since 1880, the Earth’s temperature has risen an average 0.13 degrees Fahrenheit per decade. This may not seem like a big change, but it changes the acidification of oceans. This impacts about one million species of organisms in the ocean, including phytoplankton—photosynthetic algae responsible for 80% of Earth’s oxygen production.

Former United States President Donald Trump along with many others believes climate change is a hoax.

These extreme colds, polar vortexes, are another effect of climate change. Polar vortexes are large regions in the world that consist of severely cold, rotating air and encompasses both the north and south poles. The original term “global warming” did not effectively cover these other phenomena, which led to much of the confusion surrounding climate change today.

According to the BBC, as polar ice melts, wind patterns change. These different wind patterns caused the polar vortexes to drift south. Due to the shifts in polar vortex locations, cold waves have become more dangerous. In January 2019, a cold wave caused Iowa to become colder than Alaska for a few days. A few years later in February 2021, Texas was affected by a cold wave that turned deadly, leaving multiple families without loved ones. The Washington Post reported the Texas polar vortex to have caused almost 20 billion dollars in damages.

CRCSD canceled Linn County schools for nine consecutive days due to the cold weather in 2019. The weather was cold enough local officials advised not to go outside. The temperature was minus 30 degrees Fahrenheit with a windchill of minus 58, according to Iowa Environmental Focus. This temperature set multiple records for being the coldest temperature for Iowa.

Another symptom of climate change is weather severity. Craig Malicoat, science teacher at Kennedy, comments on what kinds of severe weather are affected.

From losing homes to death, hurricanes and severe storms are never a good thing. 2021 was a record year for the number of hurricanes in the United States according to The Washington Post.

“An unsurpassed 50 named storms have formed over the warming Atlantic waters since the start of the 2020 season, with a record-setting 18 striking the Lower 48 states, including seven hurricanes,’’ said Washington Post.

In 2020 an inland hurricane hit the state of Iowa and other parts of the Midwest. This derecho damaged almost every building in the Cedar Rapids radius, including Kennedy, which wasn’t repaired until more than three months later.

CBS explains how the storm did not only ravage Iowa but showed the real effects of climate change.

“In 14 hours, the sustained line of storms covered 770 miles, moved from Nebraska to Ohio, causing more than $11 billion in damages and killing four people,” CBS said. “It was the most devastating thunderstorm in American history.”

On Dec. 15, 2021, a tornado warning was put into effect in the Cedar Rapids area. The next week there was snow on the ground. This abrupt change in weather patterns is a direct effect of climate change.

Contrary to common belief, humans are not wholly responsible for changing temperatures. Earth’s temperature rises and falls in a cycle depending on volcanic eruptions and the number of living creatures on Earth.

However, humans have absolutely contributed to the recent change in earth’s temperature. According to Global Change, carbon dioxide levels in the atmosphere have risen almost 20% since 1750. Demand for fossil fuels for beef production, making clothes and providing energy for our population is a main contributor.

“Carbon emissions have always been there … we’ve added people, factories, businesses, cars, which have sped up a process that has always been present,” Malicoat said.

Being aware of how your lifestyle choices impact your carbon footprint—how much carbon your actions emit into the environment—can help you make environment-friendly decisions.. Everyone in the world will have to change how they live their lives to save our planet.

Making environmentally friendly decisions could be as simple as turning off lights when you don’t need them. This uses less energy, so less fossil fuels are burned. Controlling how much plastic you use in your day to daily life, such as by taking reusable bags to the grocery store, can have a large impact on your carbon footprint.

“It can’t be something that we just do here in Iowa or here in Cedar Rapids,” said Malicoat. “ It has to be a worldwide effort to make changes … [and] not continuing to do the same thing we’ve always done.”