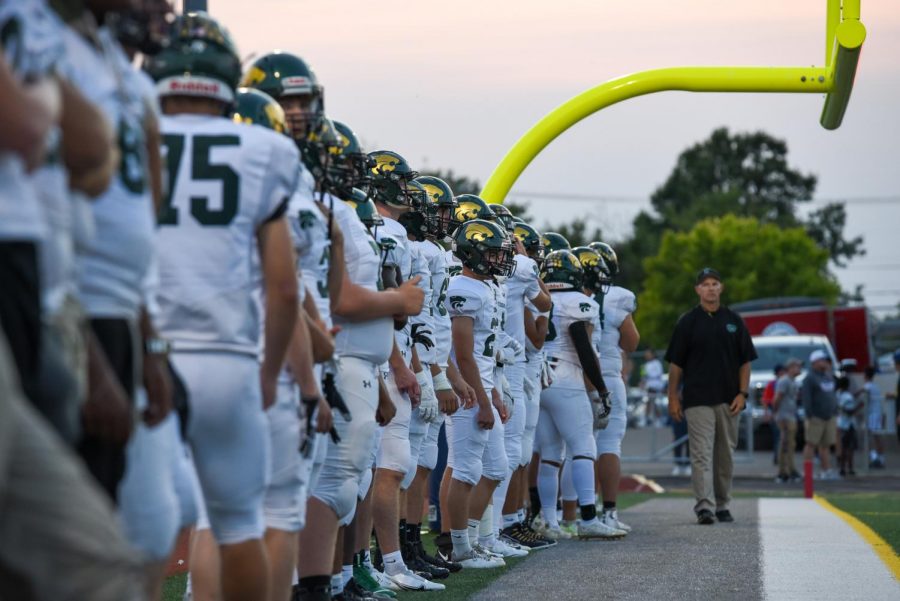 The Kennedy Football team lines up along the edge of the field before warmups.

The Kennedy Cougar football team has had a historic start to their 2021 season. Through their first three games, they have outscored opponents 103-34, led by a suffocating defense, which has 9 sacks, 41.5 tackles for loss, and 5 interceptions–two of which returned for touchdowns by junior Dominic Mann.

They also have a balanced offensive attack. First year QB Carson Blietz, who has thrown for 463 yards and 8 touchdowns, while only throwing one interception. RB Jazan Williams has run for 367 of the Cougars’ 469 yards on the ground, including running for 184 yards against Iowa CIty West in the season opener.

Over the weekend, the Des Moines Register released their Iowa High School Football rankings. Despite not playing last week due to Jefferson’s forfeit, Kennedy was slotted at number one, after slowly climbing in the rankings throughout the season.

The previous #1 team in the state was the Southeast Polk Rams. They are led by All-American safety Xavier Nwankpa, offensive tackle Kadyn Proctor, and running back Titus Christiensen. The Rams sustained a 21-7 loss last Friday to the now #2 team in the state-Ankeny Eagles. The Eagles led by running back Colin Kadoph’s 150 rushing yards and defensive end Braden Simonsen’s 9 tackles- 4.5 of which were behind the line of scrimmage, and 1 sack.

The rest of the season appears favorable for the Cougars. The highest ranked team they play the rest of the season are the #8 Cedar Falls Tigers on October 1st at Kingston.They also face #10 Dubuque Senior Sept. 23 at home. They also play 2-2 Johnston comes to Kingston on October 15th, and the Cougars visit Dubuque Hempstead. Despite a 1-3 start, Hempstead defeated Kennedy 38-20 last year.

Kennedy has a good chance to secure their first ever state title, but nothing is guaranteed until November in Cedar Falls.