Caleb Schlaak: Player of the Year 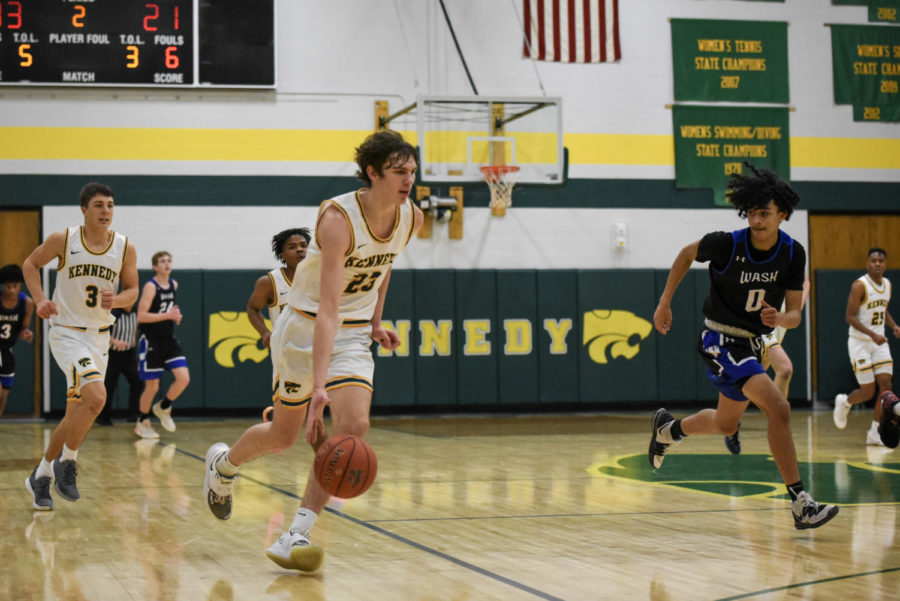 Caleb Schlaak dribbles down the court at a home game against Washington.

For the second year in a row, Kennedy High School’s Caleb Schlaak received the title Player of the Year for Boys Basketball. Schlaak started playing varsity basketball in the second half of his freshman year and has  now become a leader on the team.

Throughout his high school career, his coaches have also noticed the positive changes made.

“As a freshman Caleb was mainly a shooter. This year Caleb scored in many different ways,” Jon McKowen, Kennedy’s head Boys Basketball coach, said. “He was able to score by driving to the hoop and also is also still a good shooter. Now he is a well rounded scorer.”

During his time as a Kennedy basketball player, Schlaak broke multiple school records. He ended his 2021 season with 79 blocks, from a total 157 blocks in his career, breaking both seasonal and all-time blocking records for Kennedy. His final score tallied up at 1,066 points scored, landing him in sixth place all-time for points scored at Kennedy.

However, Schlaak’s ambitions are higher than setting school records.  His goal was to play basketball in college, and he did what he could to make that happen.

“He understood to do this he would have to be dedicated in the classroom and sacrifice free time,” McKowen said.

The hard work eventually paid off when Schlaak received offers from many different colleges to continue his career. In the end, Schlaak decided to pursue  basketball at Truman State.

Schlaak’s family helped him stay motivated and played a major role in his successful career and his ability to continue playing in college.

“My family has supported me by coming to hundreds of my basketball games over my career and have always offered me advice,” Schlaak said.

Schlaak advises future players to practice as much as you can in order to be the best player you can be.

“Get in the gym every chance you can. It will improve your game and make you more confident.”

“[I want to thank] my teammates and coaches for being there with me the whole ride and my family for always cheering me on,” Schlaak said.