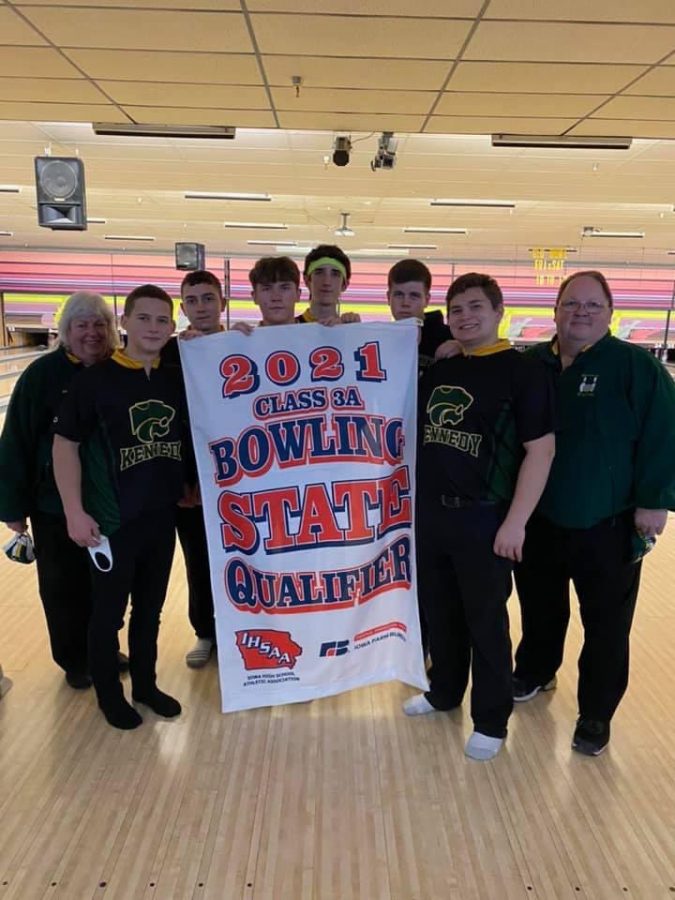 The Kennedy High School Boys bowling team made school history on Wednesday, Feb. 18. For the first time since Bowling was sanctioned by the Iowa High School Athletic Association, a Kennedy team won the State Qualifiers banner.

“We went in there knowing we had a really good chance at getting the banner,” Lucas Dolphin, so., said.

At the qualifier in Muscatine, the Boys team finished in second place, getting a bid for the state tournament. Jaxon Robinson, so., led the team in individual scoring with a game total of 473 pins, earning him an individual seat in the state competition next week. Carson Musil, jr., was not far behind with a total of 455. Kennedy’s final combined score for the individuals was 2,109 pins.

Entering the Bakers rounds, the Boys team sat in fifth place. They quickly worked their way up, scoring a total of 3,139 pins. The team finished in second place, losing  first place to Davenport Central by a narrow 10 pins. Still, second place was enough to claim their bid in the state tournament next week.

The Boys team will compete for the state title at Cadillac Lanes in Waterloo next Tuesday, Feb. 23. Spectators are limited to 18 per school due to COVID-19 guidelines. Nevertheless, the team waits, prepared for stiff opposition.

“[I’m a] little nervous just cause I’ve never been to a state competition before, but also confident knowing who I have with me,” Dolphin said.