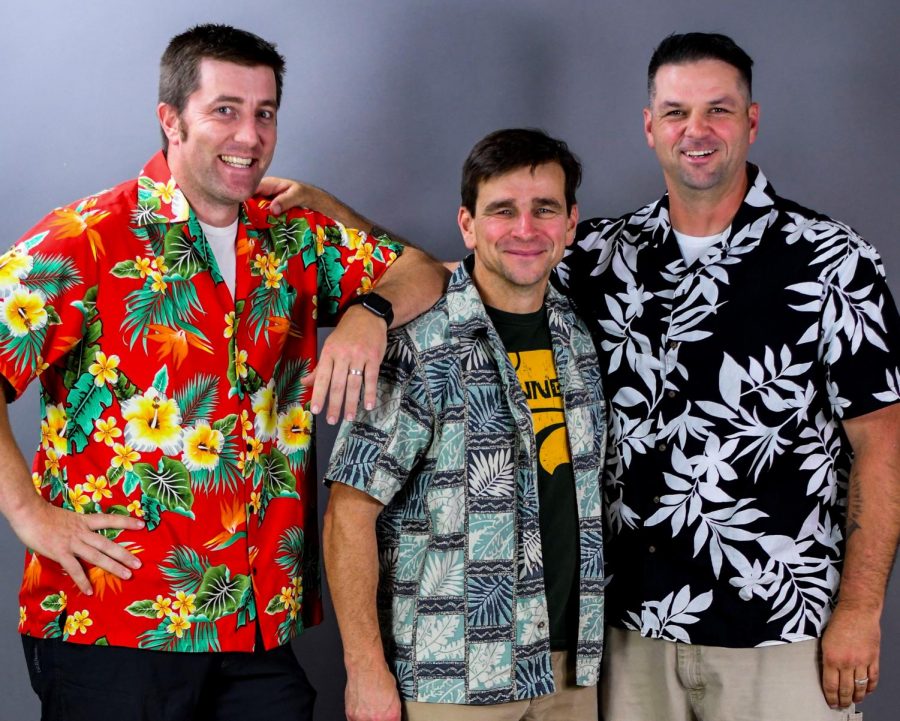 Dan Carolin (in the middle) and his squad pose in their Hawaiian shirts.

Dan Carolin has taught Japanese for the past three decades, but teaching Japanese to English speakers wasn’t the original way it was going to go, it was the other way around.

His original experience with languages was taking Spanish in high school which turned him away from foreign languages and had set his path away from any form of foreign language studies in the future. This changed though when he was looking for jobs and saw an opportunity to be an English teacher in Japan.

“I was looking to do something adventurous, and I stumbled across a job in Japan and said ‘a well that sounds adventurous cause I don’t speak Japanese and I don’t know anything about the culture,’” Carolin said.

His assumption of Japan being adventurous was correct. To travel he mainly hitchhiked, it was much safer in Japan than it was in the U.S. and it forced him to try and learn the language of the country. Taking the train in Japan didn’t force him to actually speak to people, but hitchhiking did or it’d be an awkward ride. Hitchhiking showed him how differently people think in Japan, rather than being suspicious they were inviting.

“Within being in the car for 10 minutes, they invited me to stay over at their house that night,” Carolin said.

When he ended up coming back to the United States to teach Japanese instead of staying in Japan and teaching English, he had learned that students had to make a large jump to understand the language.

“Suddenly, all those symbols, the alphabet, that you recognize as signaling sounds, are no longer any good,” Carolin said.

Carolin had relied on being able to connect with his students and seeing how they were doing, a connection to those students helped him more easily understand how to help them, however, that connection has suffered with his new 2020-2021 Japanese classes.

“With all my second, third, and fourth-year students I’m the same teacher, the connection and relationship is already been established, so you know a bit of what’s going on, but with the freshman, I don’t know who they are,” Carolin said.

“I do see, former students of mine on social media and they’re still friends with the people they met from our sister-school.”

The shift to online has caused many issues for many teachers, and for Carolin his issue was partly solved by a website called Peardeck, which allows him to watch his students write the Japanese alphabet, or Hiragana, and give them tips. The rest of his issues come from not being able to properly gauge where his students are or how engaged they are.

Carolin has two big reasons for teaching Japanese, one comes from seeing friendships and human connections made through a mutual interest in languages. English students from Kennedy’s sister-school express that they can’t wait to visit Cedar Rapids, which isn’t a common traveling destination.

Teaching someone how to understand and think from a different perspective is also important to Carolin, making someone able to understand another culture from other people’s perspectives. The culture shift in Japan really necessitates a new view to get into the language fully, and that can be said for other languages as well.

“It’s more than just mastering the language, it’s teaching my students how to understand and think from a different perspective,” Carolin said.