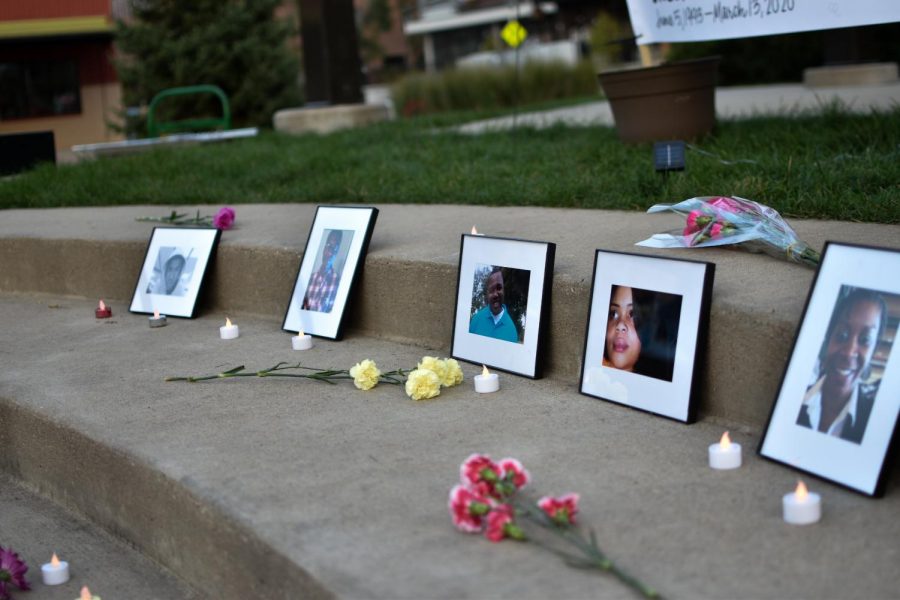 Photos of victims of police brutality were placed on the stairs during the vigil. Attendees of the vigil laid flowers, candles and other memorabilia by the photos.

A candlelight vigil was held Sep. 21 in Newbo City Market to honor Breonna Taylor, an African American woman who was fatally shot by a police officer in Louisville, Kentucky. The vigil was organized by Advocates for Social Justice, a local group focused on supporting people of color.

At the event, photos of African Americans killed by police officers were placed on the stairs in front of the stage. Participators could place flowers, candles and other commemorative objects by the photos. On stage was a banner with the names of people of color who were victims of police brutality. The vigil also featured speakers who discussed racism, police management and moving forward.

Taylor was killed on March 13, 2020 after three police officers forced their way into her apartment with a search warrant. Police believed that her ex-boyfriend Jamarcus Glover had used her apartment to hide narcotics. Taylor’s current boyfriend Kenneth Walker fired a warning shot from the hallway when the front door was broken down, which hit officer Jonathan Mattingly in the leg. Mattingly fired back six times toward Taylor and Walker. The two officers accompanying him fired a combined 26 shots. Walker was unhurt, but six bullets struck Taylor, who died on the hallway floor.

Two months later, on May 25, 2020, George Floyd was killed after being pinned to the ground during his arrest by officer Derek Chauvin, who then put his knee on Floyd’s neck. Chauvin kept his knee in place for over seven minutes, continuing after Floyd lost consciousness. Darnella Frazier filmed Floyd’s death and uploaded the video to Facebook, where it was quickly shared to other social media platforms and news websites.

Protests were held across the United States throughout the following months in support of Floyd, Taylor and a number of other people of color killed by police officers. The protests commonly demanded police retraining, legal reforms and mindset changes.

“…It is so important that we remember Breonna Taylor and ALL of the Black lives that have been lost and continue to fight for their justice,” ASJ wrote on Facebook before the vigil.