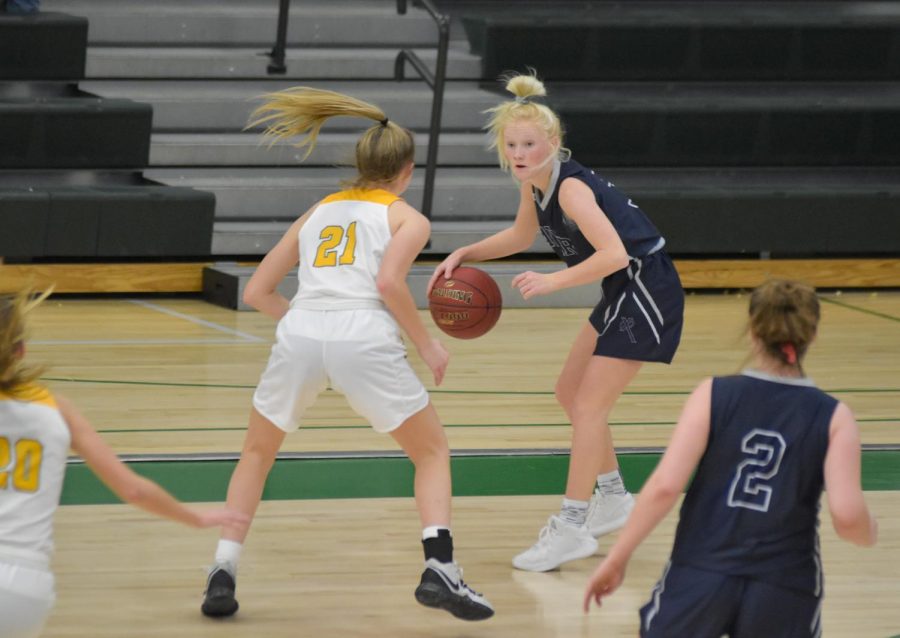 Kennedy basketball player on Xavier player who has possession of the ball.

On Tuesday, Feb 11, the Girls Kennedy Varsity Basketball Team faced the Xavier Saints at the battle of 42nd St.

The game proved to be a battle as both teams fought hard throughout the game. Players of both sides lunged toward loose balls, muscled their way to rebounds, and drove their way through the opposing team’s defense to try and score down low in the paint.

From this gameplay, both teams turned the ball over many times, and the game became sloppy. Both teams struggled to maintain possession of the ball as Kennedy and Xavier turned the ball over due to traveling calls by the referee, back-to-back steals from the defense, and careless mistakes made by players of both sides.

Nearing the end of the third quarter, Xavier had given the ball back to the Cougars by simply passing the ball to the wrong team. The Cougars turned over possession of the ball nearly every time down the court.

Despite the sloppy play of both teams, Xavier led the game in points 41-30 by the end of the third quarter.

At the start of the fourth quarter, the Cougars gained momentum largely due to Sadie Powell’s, sr., contributions as she tallied 15 points total. However, in the end, this shift in momentum for the Cougars was counteracted by Kennedy’s weak offense.

The Cougars’ would gain momentum by defensive plays, and Xavier thwarted these attempts of a come-back with solid defense.

At the end of the fourth quarter, Xavier’s lead remained intact and the Saints maintained a 13 point deficit over the Cougars. The final score ended as 53-40 Xavier in the battle of 42nd Street.