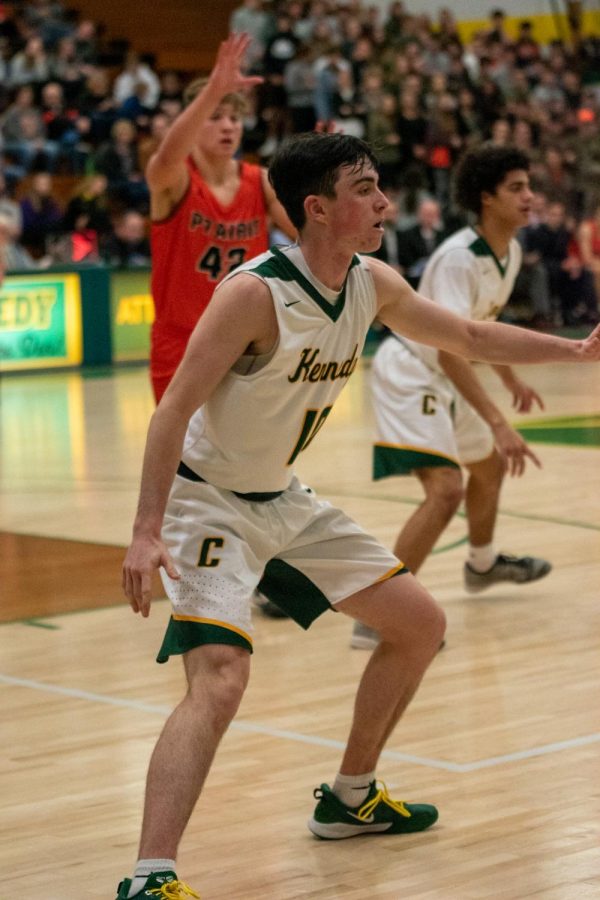 The Cougars tipped off with Caleb Schlaak, jr., and began the game with an invigorating dunk from Paul Cory, sr. The dunk was assisted by a slick back cut pass from Kenzie Reed, fr.

Throughout the first quarter, Iowa City Liberty set up a half-court trap on defense. In response, the Cougars took their time, playing a systematic offensive style.

The second half opened with a momentum shift in favor of Iowa City Liberty. The strong plays and crowd’s energy was responsible for this swing in momentum.

The Iowa City Liberty fans proved little in number but loud in spirit. The Lightning Bolts cut the lead to only one point, and by the end of the third quarter, the score was 39 – 38 Kennedy.

To combat this momentum, the Cougars held possession of the ball on offense to melt time off the clock in the fourth quarter. With 2:09 remaining, the score remained close as Kennedy held onto the tight lead of 47 – 44.

After that score, Kennedy closed out the game, winning 52 – 47. The Cougars had displayed a full team effort in this game as they scripted two players in double figures and another at eight points.

The Cougars Men’s Basketball Team will play this Friday on Feb. 7 against Iowa City West at 7:30 p.m. at Kennedy.