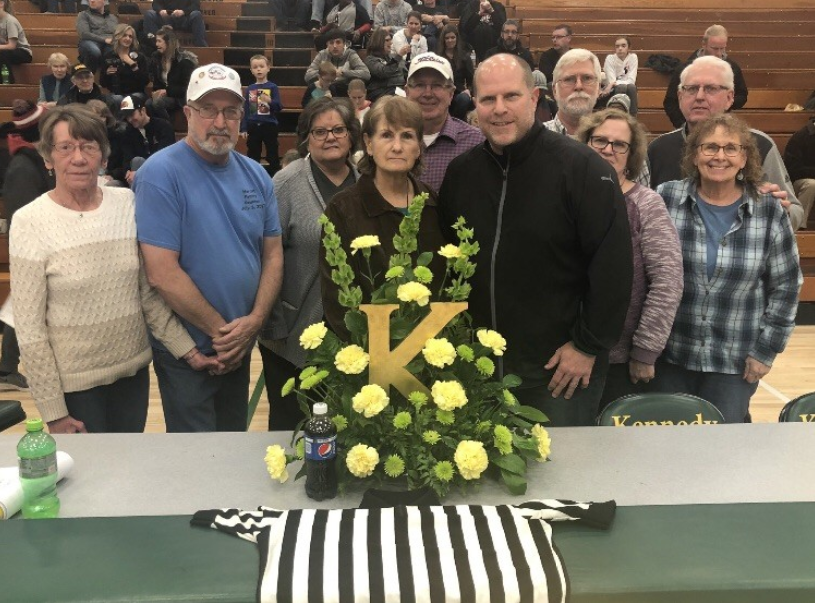 A memorial made for Jeni Newland at a Kennedy Basketball game

For the past 15 years, Jeni Newland has worked in the halls of Kennedy, creating memories with both her students and her co-workers. Newland provided care and support for those who needed it most. She worked with individuals who faced behavioral issues and autism, helping them through their highschool careers.

On Jan 8, Kennedy students and staff received the devastating news that Jeni Newland had passed away.

“It is with a heavy heart that I am writing to inform you that long-time Special Education Teacher Jeni Newland has passed away.  Jeni has been a teacher at Kennedy since 2006 and was a truly loving educator who cared deeply for her kids.” Jason Kline, principal at Kennedy, stated in an email sent to Kennedy students and families.

She left behind a legacy of being a genuine and caring person, especially with one of her coworkers, Katherine Klein. Klein worked with Newland, and described her as a good friend and a nurturing counselor for her students.

“She never showed stress ever, even in really stressful times with her students,” Klein said.

Jeni was a very caring individual who was patient and graceful. She never let issues affect her in or outside the classroom. Her time here at Kennedy allowed her to help hundreds of kids. Everyone she worked with left the school with a valuable take-away.

“Her kids learned a lot from her in terms of just life lessons,” Klein said. “The biggest thing is just you know, how to deal with when life throws you a curveball.”

Mark Musker worked alongside Jeni for years. He held her in high regard and says she made him a better person. The two had developed a strong bond while working together, as they helped each other through life.

“I always told people she was my better half,” Musker said.

Jeni was able to get along with everyone she worked with leaving behind lifelong  impressions on her students as well as her coworkers, often impressing them with her ability to jump in and help however she could. “[Losing] Jeni is a huge loss to Kennedy for everything she did and all the people that she was friends with and was a part of,” Musker said.

On Jan 20, Kennedy remembered Newland at a basketball game with a memorial. Newland was seen with a Pepsi in her hand almost every day so Kennedy families and students  included a Pepsi for Newland at the memorial as a homage to her love of the drink.

The impact she had on her students and the people she met will always serve as a way to memorialize her.

“I would say that Jeni changed lives with everybody she talked with, or came in contact with in some way,” Musker said.