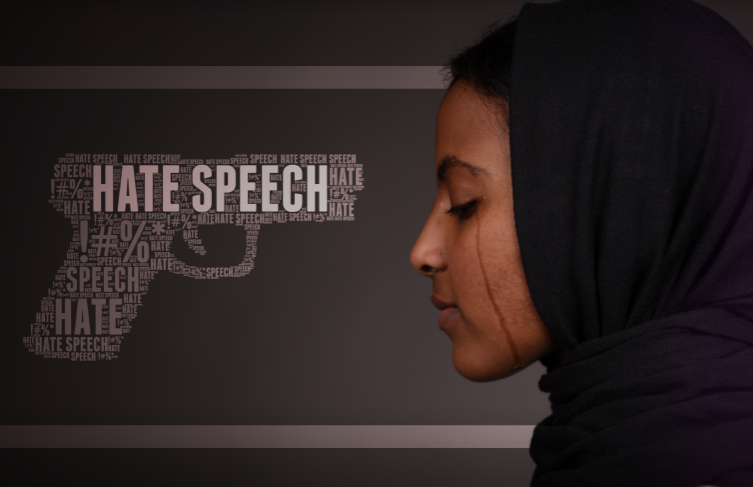 Raafa Elsheikh, jr., who is forced to hear derogatory terms said to her constantly for merely existing. Photo edited by Ashton Nanke.

As I walk through the hallways at Kennedy, I hear things. There are people talking about the test they just took and the homework they forgot to do. They’ll talk about that funny tweet they saw this morning or the tik-tok that made them laugh. I hear friends joking and teasing each other. Most alarming though, I hear hate speech, specifically against people of color and the LGBTQ+ community.

Hate speech is an enormous problem at Kennedy. Every school day, whether I’m in a class, in the hallways, or at an extracurricular activity, I hear some form of racist or homophobic slur. It’s typically said in a joking manner, like an offhand comment or a teasing remark. Regardless, the suffering that it causes is immense.

Movements working towards ending hateful speech have been happening for years, most recently being the “Spread the Word to End the Word” campaign. Yet, while you rarely hear the r-word at Kennedy anymore, other terms are spoken daily.

“It’s easy to hear people casually calling their friends f*g, and I feel like there’s a standard that’s held with most slurs where you can’t say it if you’re not a part of that minority, but with slurs for lots of other groups, anyone can say it and it’s not held to that same standard. That’s not fair because there’s history behind both of them,” Gwen Thompson, jr., said.

The impacts of these phrases are not always visible. It’s hurting the student who hasn’t come out yet, who sits in the back of the classroom and hears the hatred being spilled in what is supposed to be a “safe space”. It’s the student who hears their identity used as a derogatory term, and goes home, carrying that feeling of worthlessness with them.

The hatred does not end with homophobic comments. There are students within the walls of Kennedy that have been caught using racist language. Rahma Elshiekh, jr., commented that her peers use these terms because their friends deem it acceptable. While it may be considered tolerable for some, a word that is rooted in oppression and hatred should not come from the tongues of the privileged.

These words can have lasting impacts on the students that face this discrimination. The history behind hate speech is tragic, and no amount of time can or should erase the grave mistakes of the past.

If Kennedy High school is really the place that we all wish it was, why are the halls filled with words that make me want to cover my ears? Why is there so little respect or concern for others? Why do students use language that they know is harmful? Why, when I am sitting in class, do I hear such hurtful words?

Why do so many students stay silent?

I know I am not the only student who hears these degrading terms that fill our halls. There have been so few occasions where I have heard anyone reprimand these actions, teachers or students, and that is where the change needs to start. If any form of hate speech is said, it is up to the bystanders to say something. If not, the hatred will only continue, and the pain will be irreversible.