Women on the Defense 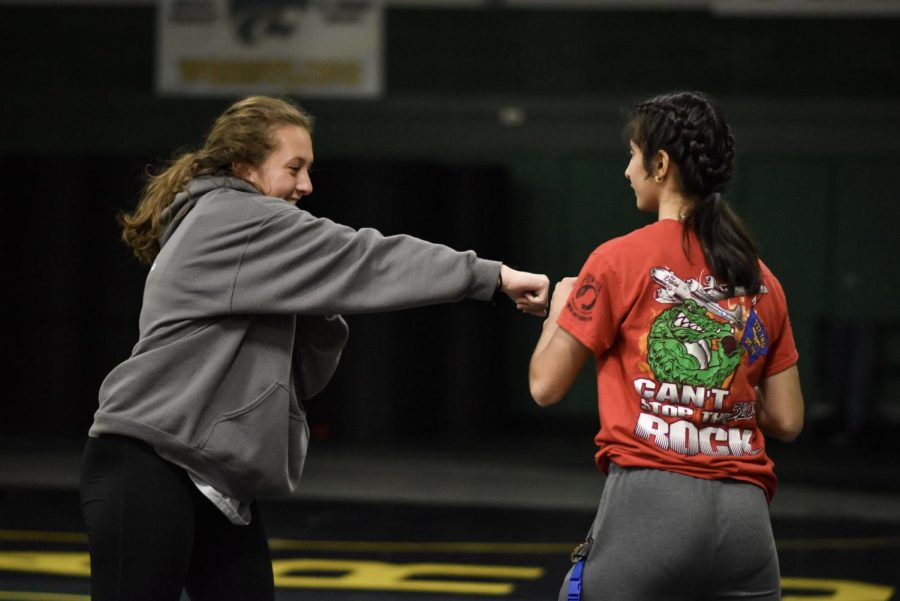 Member of the WSD learning how to react in a dangerous situation.

Mollie Tibbetts and Celia Barquin Arozamena are names you should not know. These are names that make us remember this world is not what it used to be. Their stories warn us of hazards out of our control. One out of every six of us will be subject to the same outcome. For some, this cumulates into a paralyzing anxiety.

Walking alone in the dark Kennedy parking lots strikes fear into my chest as I remember the sexual assault cases that plague my gender. Before venturing out into the parking lots in the evenings, I am compelled to clutch my pepper spray, which is forbidden on school grounds. My female peers and I hear sexual comments often but we are terrified of what the result may be if we don’t laugh it off. We are taught to stay inside, fear the unknown, to keep our heads down and avoid confrontation. We are not taught or given the tools to defend ourselves.

Women shouldn’t have to feel weak and afraid all of the time. We shouldn’t have to sacrifice our confidence and high school experiences to ensure our safety. Ideally there would be no men committing these acts, however every 73 seconds, another American is sexually assaulted. We must act to lessen these odds by being conscious of our surroundings while simultaneously living our lives to the fullest. There is a way to live our lives and keep ourselves safe.

At Kennedy, Shefa’a Tawil, a junior Taekwondo instructor, introduced the solution of a Women’s Self Defense Club. Tawil believes that girls deserve to feel empowered and capable of fighting back.

At the first meeting, 64 Kennedy girls came to the wrestling room ready to learn how to stop an assaulter in their tracks.

“This is the first year and we already have 64 people. It says a lot about society and how women feel in it,” said Tawil.

Women’s self defense offers ways for women to defend themselves that compliments womens’ strengths. These tactics include how to effectively punch, kick, break away, and take attackers down. Learning self defense skills will raise students confidence in threatening situations.

Despite the focus on physical defense, there is also an emphasis on the verbal and emotional responses to threats.

“Besides the moves, your words are like one of the most important things. So, like a weapon, your words can do the most damage,” Said Tawil. “If it continues, then use your hands, your fists, whatever you need to do to get out.”

During a recent meeting, Police Officer Charity Hansel spoke about other non physical gestures that can aid in a threatening situation. She mentioned how a stern look can be vastly effective. Attackers are not looking for powerful, confident victims, they are looking for weak, helpless females. Always be prepared to give strong eye contact to people passing by. It is not a woman’s responsibility to not look like a victim, however women can feel more at ease if they know how to lessen the odds of an attack.

“I think it’s good or like needed because of what’s happening in today’s society, the common attacks, like objectification of women,” said Tawil. “I feel like it’s needed because we’re less dominant, like we’re not as strong, so if we know how to avoid or get out of situations, we’d be safer and we’d feel safer, too.”

We shouldn’t have to feel weak. I shouldn’t have to be defenseless walking down the parking lots of my own school. It is time to put those fears behind us and live our lives. Everyone should look for something that makes themselves feel better about these threats. Maybe Kennedy’s Self Defense Club can do that for you.