Standing Up Against Social Injustices 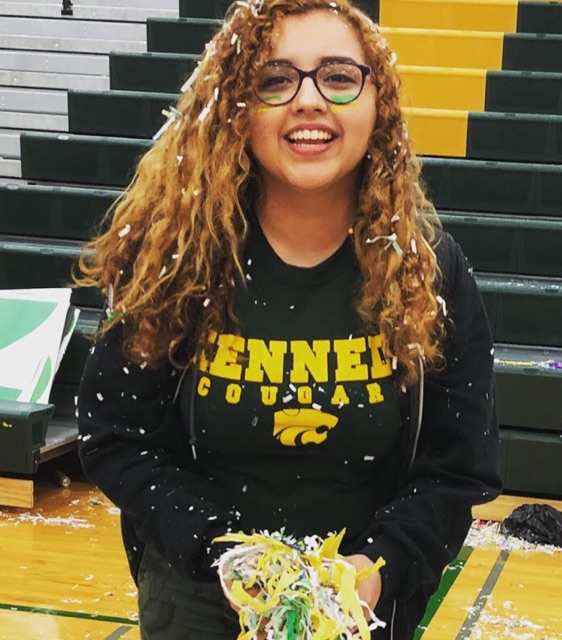 To the naked eye, Jackie Garcia may seem like an average eighteen-year-old high school student, but behind her tightly curled hair and relaxed demeanor is a girl who has encountered more challenges and overcome more obstacles than most adults.

Garcia is a student at Kennedy High School who moved to Iowa from Mexico in July, 2017. She has settled into school and has been learning English since she came here. Garcia’s teachers applaud her for being extremely hardworking and dedicated to her school work. Señora Harger, Garcia’s AP Spanish teacher, describes Garcia as being very persistent and determined in everything she does. If Señora ever needs help in the classroom, Garcia is always the first person she asks. She is eager to answer questions and participate in class but does not always know how to say what she wants to in English.  It was very difficult for Garcia to learn, but after only about a year of schooling, she was able to communicate in English very well.

The teenager’s journey to the United States was anything but easy. Born in Baja, California, Garcia was forced to move after her mother and father went through a rough divorce. Her father had issues with alcohol and would be abusive towards her mother when he became drunk. While she still remains true to her Mexican culture, Garcia disagrees with the lack of women’s rights and opportunities in her native country. After witnessing her mother not fighting her father’s abuse in Mexico, she realized how many more opportunities are available to women in the US.

The young girl’s experience highlights a major issue in Mexican society. Domestic violence against women is seen in about 47 percent of women in relationships over the age of fifteen. In Mexican society, women remain passive and are often blamed for domestic conflicts, despite being victims of abuse. Additionally, in Mexico, women are expected to get married and have kids by the time they reach Garcia’s age. In fact, Jackie revealed that most of her friends back home are already married and having children.

The limitations for women in Mexico do not end there. In Mexico, many women have to stay at home, and their participation in the workforce is much lower than in the States. Most of the women that do work in Mexico work in factories, such as textiles. Unfortunately, Mexico has one of the largest gender employment gaps in the world with the difference in male and female employment rate being 35.5 percent compared to the average of 12.2 percent.

The issues of gender inequalities in Mexico are deeply rooted in society.  Mexico has the idea of “machismo” ingrained in society. Machismo is the idea that men are superior to women which causes overwhelming feelings of pride and aggression in being a man. This causes much of the violence and inequality that are seen in Mexican society and women are objectified and abused at high rates.These patriarchal ideals are roadblocks for women in Mexico, but steps are being taken to improve these issues, including new legislation and more women in leadership positions.

Garcia found that after moving to the United States issues involving employment and gender bias were much less prevalent, but a new obstacle she had to face was racial discrimination. There are countless misconceptions and controversies that surround the topic of immigration. Garcia has first-hand experience of coming to the United States from Mexico and has developed very strong feelings about the topic.

Garcia has had to endure many instances of prejudice in her time here, including people asking to see her green card or assuming all Mexicans are criminals. Jackie frowns upon those who do not accept immigrants

“No matter what they say, we are here,” Garcia said.

She explains that the treatment of immigrants and those that speak other languages needs to be improved. Rather than saying “WHAT?” or being rude to people who do not speak English, being patient and helpful is the first step towards improvement.