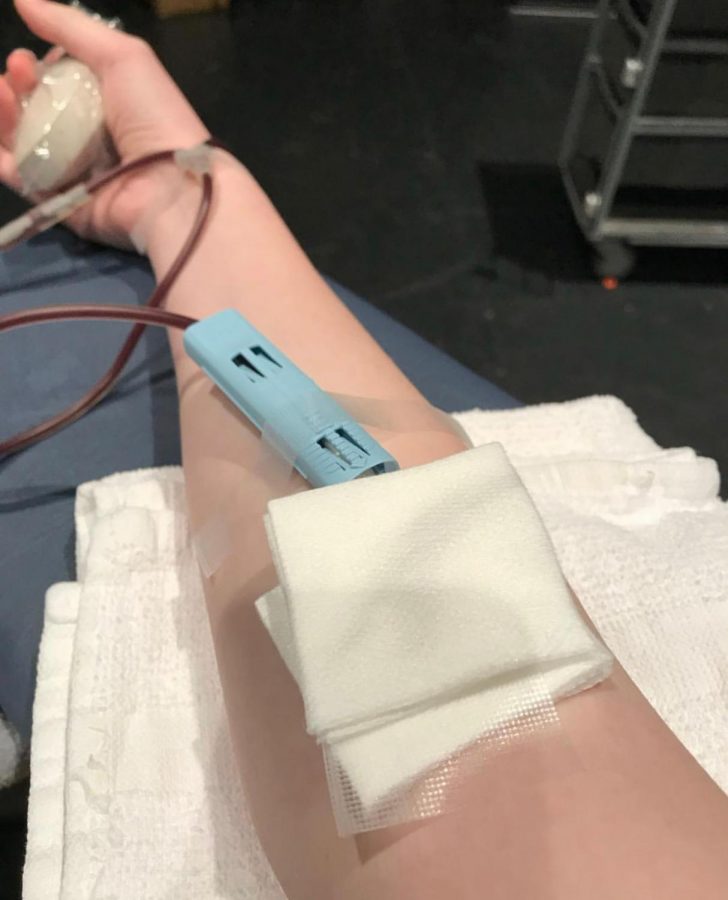 A student donates blood in the Kennedy Black Box.

There are many ways to volunteer; bell ringing, money donations, cleaning up trash and more. But another way to volunteer is through donating blood. Donating blood is a unique way to give back to the community. By donating, it could potentially be saving someone’s life. Due to the weather conditions lately, blood centers have lost over 2200 donations.

“I donated because I knew it would benefit somebody else in need” Caleb Syke, sr., said.  “I’m even thinking of donating plasma at some point.” Syke had claimed he was a little nervous before donating but everything worked out and he was fine afterwards.

Kennedy High School helps support the Mississippi Valley Regional Blood Center by hosting around three blood drives every year. Kennedy will be hosting another blood drive on Feb. 27 to help increase the donations. Students who sign up must be sixteen or older and must have a parent signature to participate, to sign up see Kris Hellweg in room 271. The drive will take place in Kennedy’s Black Box. This event will go from 8 a.m. to 11:30 a.m. and spots are limited. The procedure itself last about five minutes with an additional 10-20 minutes of paperwork.

“I originally started donating because I wanted extra credit for biology.” Kaitlyn Goldsberry, jr., said. “But I now donate because of the thought of helping other people.” Goldsberry said. She began donating her sophomore year of high school.

“After donating my first time I received an email from the person my blood went too. I couldn’t help but feel I made an impact.” Goldsberry said. Goldsberry has also inspired some of her friends to help out with the blood drive.

Before going to donate, it is important to eat lots of food and drink lots of water. Eating junk food is not advised because it leaves your system faster than healthy food which could result in fainting. Drinks and snacks will be offered in the black box for donors. Donating blood can be dangerous if not taken seriously, and only students who plan to take the process seriously are encouraged to donate. After donating blood students are advised to stay for about ten minutes before returning back to class.

Donating is a form of volunteering and students are able to get recognized for it at graduation. If a student donates at least a gallon of blood by  graduation, students receive a medal for their volunteer work. Donating can be great way to become involved with the community and also give back.