Making Kennedy Better One Ticket at a Time 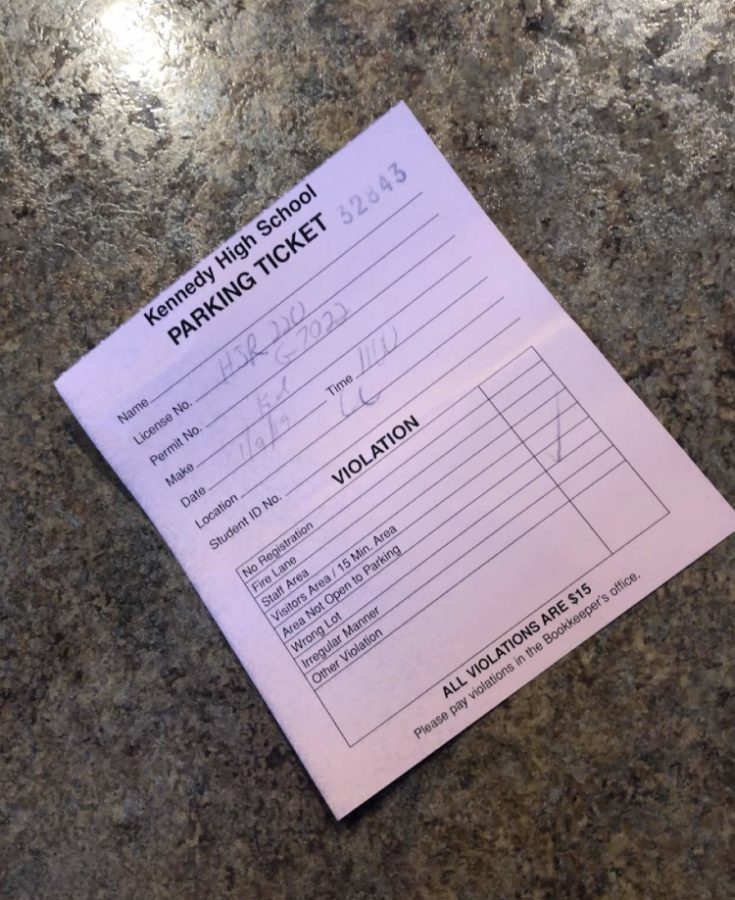 Kennedy parking ticket given out by Carl Barton.

When Kennedy High School students walk to their parked car and find they got a ticket, most pay the money and forget about it. But where does the parking ticket money go after students pay?

Kennedy makes around $6,000 to $10,000 a year from parking ticket money. Roughly around four tickets are handed out each day and cost $15 per ticket, according to Carl Barton, the teacher in charge of handing out tickets.

“Typically, we try to buy something that supports all students,” Barton said.

The money raised over the course of the year goes to many things to benefit our school.

“The parking ticket money goes to discretionary funds for administration, so they cover costs for academic decathlons, all the awards we give out to seniors, that sort of thing,” Stephanie Cory, Kennedy’s bookkeeper said.

Kennedy students have some other ideas for what the ticket money can go towards.

“I think it could go towards a new cafeteria or more improvements to the auditorium or black box. We make improvements to sports areas around the school and Kennedy does a good job in supporting the arts but they never really improve it,” Chloe Gandy, so., said. “Other schools have improved their cafeteria and classrooms and I think we should too.”

Sophomore Abbie Green also has some ideas on how to use the money to improve Kennedy.

“I think what it goes for is good and thought out, but money could also be used to fix up the school a bit or make improvements to the school that everyone can use,” Green said.

“The school could use the parking ticket money for charter busses in times of long trips for each kind of activity or sport. Sometimes people only recognize sports as the ones needing the space for equipment, but there are lots of other clubs that need the space as well,” Lizzie Bagby, so., said.

While Kennedy students support the use of the parking ticket money, they also believe the money can be used for many other things to support the growth and development of the school.