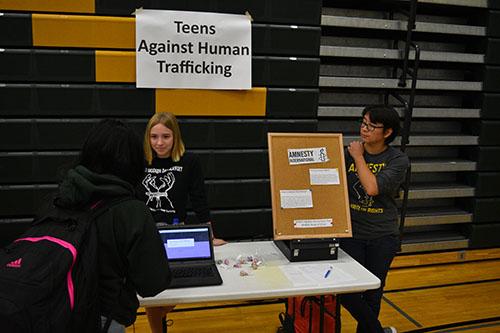 Teens Against Human Trafficking group during the club fair.

The cell phone that’s in your hand, the white athletic shoes on your feet and the coffee you drank for breakfast could’ve been made by an innocent enslaved in human trafficking. Human trafficking is one of the most prevalent problems in America today.

According to the website dosomething.org, “There are approximately 20 to 30 million slaves in the world today.”

Human trafficking is described as modern-day slavery and usually involves exploitation. It’s the business of stealing one’s freedom for profit. Whether that’s forcing victims into prostitution, servitude, slavery, or pornography. Being an 18-year-old female, that makes me and the people I care about at risk for human trafficking.

I think it’s extremely important to educate those of the causes, risk factors, and solutions to human trafficking.

The severity of human trafficking is immense. According to the U.S. State Department, “600,000 to 800,000 people are trafficked across international borders every year, of which 80 percent are female and half are children.”

With a problem that affects so much of the population, shouldn’t more people be informed about it?

There are multiple things you can do to prevent and decrease human trafficking. The first step is getting educated.

Learn what human trafficking is, why it’s prevalent today, and how you can protect yourself. Another way to solve human trafficking is sharing your knowledge with others. Share credible information with those around you. Start a group at your school or join one. At Kennedy, you can be a part of, “Teens against human trafficking” and take a stand alongside fellow classmates. The more people that know about this problem, the better.

Another effective way to fight against human trafficking is learning self-defense.

After the disappearance of Mollie Tibbett’s from Iowa City, my school Resource Officer, Charity Hansel had an informative self-defense talk with every gym class. She spoke about the reality of dangerous situations and ways students can protect themselves every day. Charity started out with tips for self-defense.

Those tips being, stay alert, don’t be looking down at your phone screen walking in a dark parking lot at night, always be aware of your surroundings. Assert eye contact with people you walk by. If the perpetrator sees you looking at them, they will be less likely to attack you. Officer Charity also mentioned ways to fight off physical attacks. Hitting core spots like the groin, eyes, and nose can catch the attacker off guard. Allowing you time to escape.

With human trafficking comes speculation and myths of what really happens when someone is trafficked.

Some of those being, “Only women and girls can be victims and survivors of sex trafficking or usually a violent crime.”

According to polarisproject.org, “One study estimated that as many as half of sex trafficking victims and survivors are male. Advocates believe that the percentage may be even higher but that male victims are far less likely to be identified. LGBTQ boys and young men are particularly vulnerable to trafficking.”

This shows that no one is safe from human trafficking. Men, women and children are at risk. Polarisproject.org also stated, “The most pervasive myth about human trafficking is that it always – or often – involves kidnapping or otherwise physically forcing someone into a situation.

Most human traffickers use psychological means such as tricking, defrauding, manipulating or threatening victims into providing commercial sex or exploitative labor.” Frequently victims feel hopeless when trafficked and can’t find a plausible solution to find help. Therefore, it’s so important to step in and give them the help they need.

Lastly, anyone can learn ways to identify human trafficking victims. Human trafficking happens all around the world in big cities or small, so you never know when you could recognize someone in need.

A couple red flags to tell if someone is a victim of trafficking include, a person appearing malnourished, signs of physical abuse like bruising and cuts, and their pimp (usually an older male) not allowing someone to go out in public alone or speak for themselves.