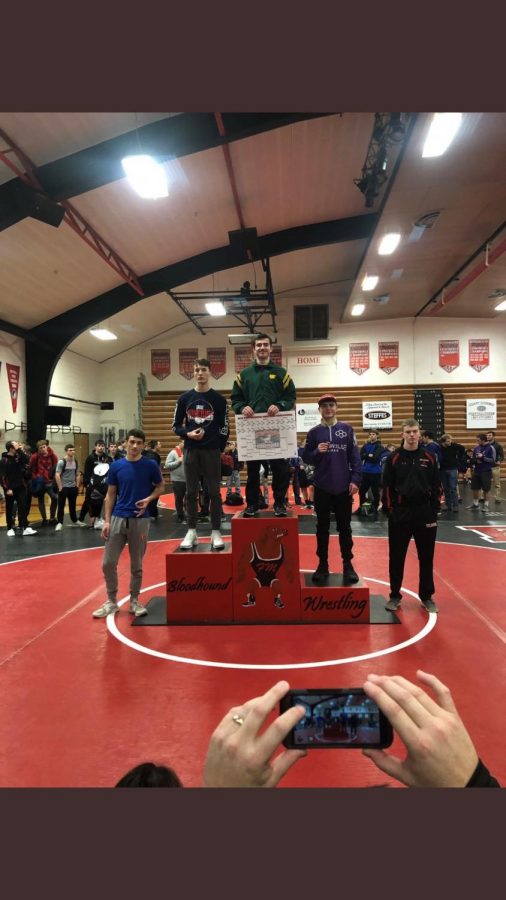 Junior Dylan Falck, suffered from a severe injury regarding his C3 vertebrae on Feb. 5, 2018. Falck was wrestling when he was thrown down by his opponent and was knocked unconscious. Falck was sent to the hospital and discovered his C3 vertebrae was fractured. The injury landed him in a neck brace that he had to wear for seven weeks.

Almost a year after his injury, Falck is back on the matts. At Falck’s most recent match in Fort Madison, he earned first place and was announced ‘Champion’ at the meet.

“I was a little scared to start wrestling again,” Falck said, “After a month or two I was back out their doing my thing without even thinking of my injury.”

Falck’s injury didn’t stop him from doing what he loves.

“One of his first questions after the injury was; ‘When can I wrestle again?’ and we knew kind of right away,” Amanda Falck, mother of D. Falck, said.

With a good attitude and no fear, Falck eventually overcame his struggles and was seen back at practices.

Being a wrestler who has faced injuries, mental blocks are common, but Falck had little fear.

“At the start of the year I’d get sore, but that was expected,” Falck said. “It hasn’t given me any problems lately though.”

Although Falck wasn’t having a mental block, his mother was.

“I’m very anxious, prior to his first meet this year I wasn’t entirely sure I was going to be able to watch it all, because I was still in shock [upset].” A. Falck said. “I’m normally shaking by the end of the match.”

Falck is not afraid to try things again. A. Falck has watched her son perform the same move that caused his injury, and has to refrain from screaming, “Dylan no!”

Falck has recovered nicely and feels like a better wrestler from this experience. Falck continues to wrestle for the varsity team, and has bounced back from his injury. Falck has been receiving first place at other tournaments and feels he’s made a full recovery.