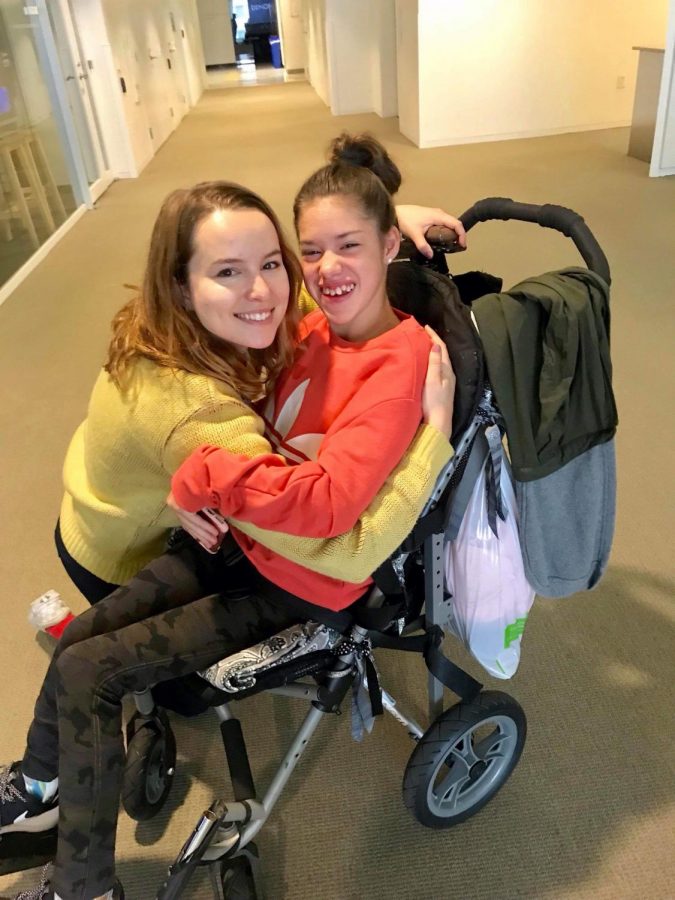 Bella Trotter and Bridgit Mendler hug after spending the day together. Photo by Kristi Trotter.

A childhood wish can range from wanting to be an astronaut to getting a hippopotamus for Christmas, but for Kennedy freshman Bella Trotter, her wish was meeting Good Luck Charlie star, Bridgit Mendler.

Bella has Cerebral Palsy, but LSG seizure disorder is why she qualified for Make-A-Wish Iowa.

“Make-A-Wish came to our house in May 2017 and it sounds crazy, but we waited over a year until Bridgit could meet with us. We even told Bella she could do whatever she wanted. We told her she could go to Disney for seven days. We said you can do this, you can do that, but no. She really wanted to meet Bridgit Mendler,” Kristi Trotter said.

In April of 2018, Bella learned her wish would come true.

“I’m just saying having to wait that long I kept checking back in with Bella saying, ‘Do you want to still go? Do you want to change your mind? Do you want to go to Disney?’ If we went to Disney, they could get that organized probably in a month and we could be there,” K. Trotter said.

The Trotters waited all summer to see what Make-A-Wish Iowa was planning.

“After Bridgit said yes, she wanted ideas of what we wanted to do. Let’s go shopping or do nails she said. It was awesome they sent us a little packet that says you’re approved,” K. Trotter said.

“We walk out to leave for the nail salon and a long black stretch limo is waiting to take us. For me it was kind of like the first moment where I was like oh my gosh, I can’t believe this is happening for Bella,” K. Trotter said. “We get there and I don’t know what she’s going to say, I don’t know what she’s going to do. I was nervous because all of Bella’s seizures.”

To the Trotters’ surprise, everything went smoothly.

“Bridgit wasn’t standing there right away. Then she literally just walked up, and had nothing fancy on, no makeup, and had her hair pulled back. She was so sweet. Right away I thought she was totally tuned in to what Bella would want,” K. Trotter said.

Instantly Bridgit suggested she and Bella get matching nail colors.

“Bridgit would say, ‘Bella what do you want to know about me? You can ask me anything, I’m an open book,’” K. Trotter said, “We did write down the top 10 lines of Good Luck Charlie because Bella has watched every show over and over.”

“Bella associated with the show so much she would call her own family member names of the actors in Good Luck Charlie. She was Charlie and any of her favorite people would be Teddy,” K.Trotter said, “It was amazing and perfect and I’m so glad we honored exactly what she wanted, which was to go wherever Brigit was. Bridgit was wonderful. Boston was wonderful. The trip was extremely meaningful.”