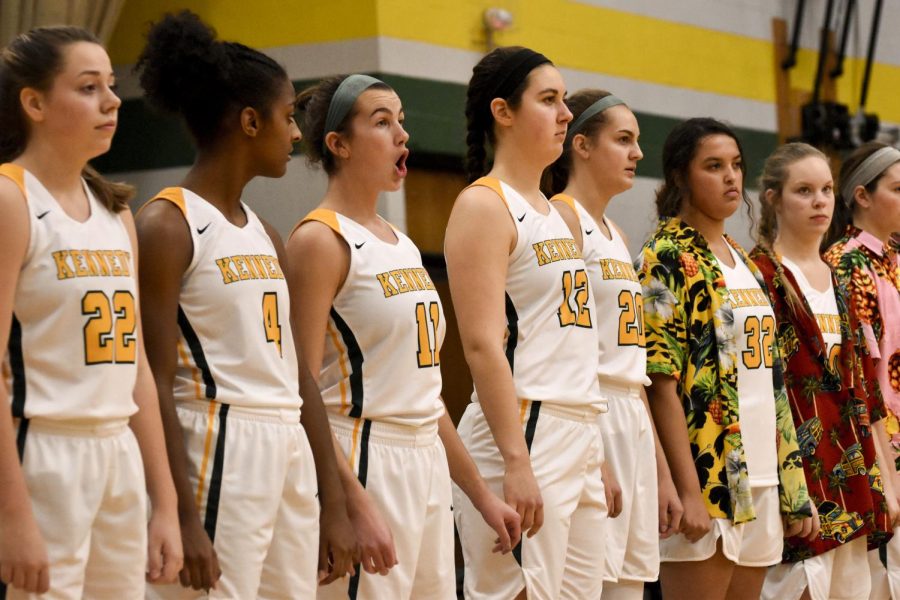 Kennedy's women basketball team line up for the National Anthem.

Kennedy women’s basketball 2018-2019 season started out with a new coach and a new perspective.

“Coach Courtney tells us what we do wrong. There’s more positive energy this year. Along with new expectations. All he asks for is effort. He doesn’t care about mistakes if we take responsibility,” point guard Lauryn Vaske,sr., said. “He is hands-off and let’s players deal with their own mistakes and steps in when necessary.”

“So far we’re off to a rough start we’ve played against some very tough competition. Our first five games the teams were very good and rated. We are four games through, but getting better and showing improvement,” Varsity Head Coach, Andrew Courtney said. This is his fist year coaching Varsity, but he’s been in the program for about nine years coaching various levels.

“The coaching staff and I are moving forward with a very positive approach program wide. More of a family feel. It’s not just each level by themselves, but we are one program with different levels,” Courtney said.

After the resignation of coach Tony Vis, last year coach Courtney stepped in.

I think he was “chosen because of his background of being in the program. Vaske said. “He’s a pretty good guy.”

“Our first game didn’t go as planned, everything felt new and we hadn’t played together before, but I think the team has more confidence because of the coach this year,” Laila Sain, sr., said. “The team goal is to have an above 500 average. Meaning win as many games as we lose.”

Courtney said he wants to “play as many girls as possible, be positive, and try for everyone to have a good experience. I’m just trying to start new, stay positive, and change the mindset. Our motto is work hard play hard.”