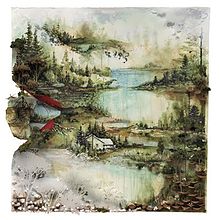 Bon Iver’s new self titled album “Bon Iver” recently won two Grammies including Best New Artist and Best Alternative Album which were very well deserved. What started as one man making beautiful and original music has now turned into a symphony of guitars, synths and drums all under the howl of Justin Vernon’s entrancing vocals. Before all this Bon Iver consisted of Justin Vernon some instruments in a cabin in Wisconsin. Vernon started to create the album “For Emma, Forever Ago” completely on his own. Every instrument, every harmony and every word written and recorded on his own. After all the attention he got from this album he decided to make  a second one but in a different direction. “I brought in a lot of people to change my voice — not my singing voice, but my role as the author of this band, this project,” says Vernon. Even though he had more people featured on this album it was still completely built by Vernon himself. In my opinion this should of been the album of the year. The originality and diversity of the music Vernon makes is mind boggling. If there was one album I’d be buying and not illegally downloading it would be this one.