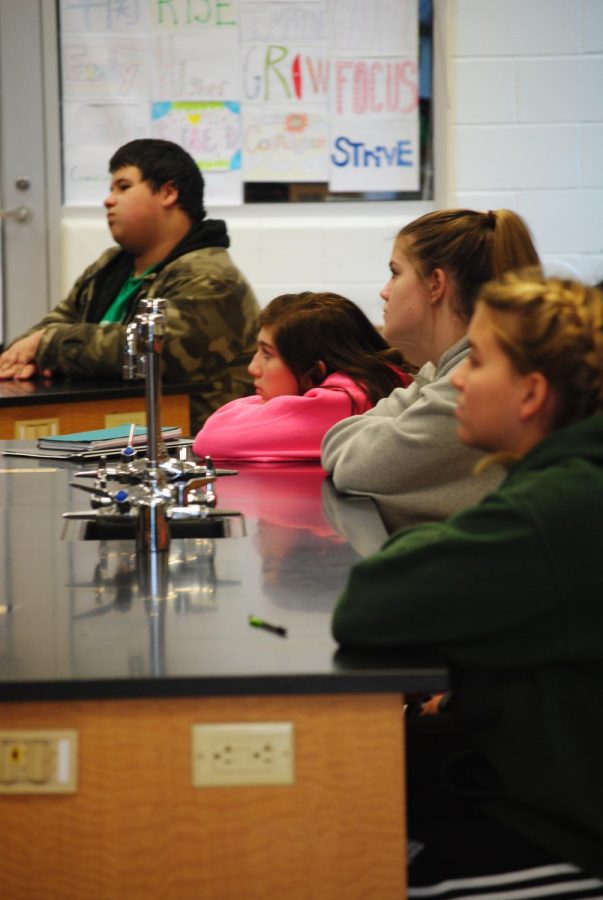 Students Sydney Maxa so., Ally Kloos so., and Bobbi Scott so., during SMART time to hear the speakers talking about their engineering.

Tutorials are held in different teachers’ classrooms every day for students to finish work, get help, or study during the day. Open rooms are also available for students to go to if a class is not available at the given time.

For some students, the cafeteria is an open destination to sit between second and third period. Staff and faculty have made it clear that SMART time should be spent in classes, and the cafeteria will be taking less students as of this year. Homework and time to quietly study is what should be going on in the cafeteria and count of students entering will be kept track of. The new limit allowed is 200 students with the exceptions of no cell phones.

Staff has stressed that cell phones and gaming is not allowed.

“Most students aren’t really productive in the cafeteria. They usually play games,” John Fan, so., said. “Teachers tell people to do something useful with their time, but they don’t always listen.”

Seats fills up quickly, and space is often overcrowded with students.

“With such a large number of kids, some not-wise choices and decisions are bound to happen,” Adrian Evans, a cafeteria adviser and teacher, said. “Students should be in classes that they or struggling or just need extra help in. They can go if a lesson doesn’t click, or they need help, and it is always smart to work on homework.”

Many students head to the cafeteria when there is no where else to turn to.

The cafeteria is open to sophomores and freshman, and the IMC to juniors and seniors.

“I go because I don’t have anything to do so I just go there as my last option,” Fan said.

Lists of teachers with open rooms are posted around the school and are provided in classes. No students are allowed to leave campus for SMART Time.