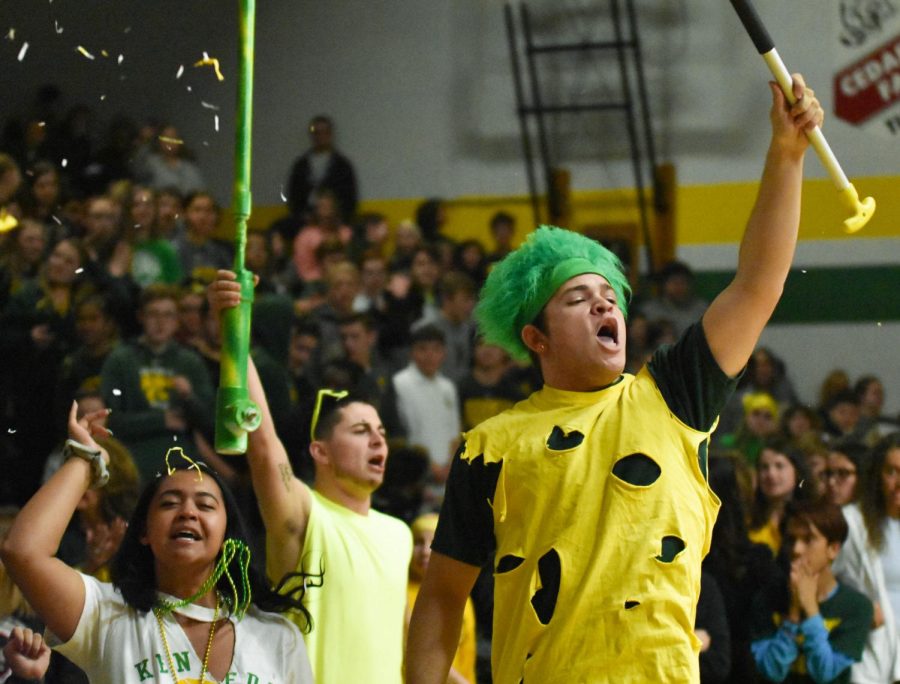 It’s been Kennedy’s tradition to have pep assemblies vastly different than those of other schools. Students like to go all out with school spirit and competition among the freshmen, sophomores, juniors and seniors.

Principal Jason Kline — an admitted pep assembly enthusiast — loves the tradition, one that he says through the years, “has gotten even better, I would say, in terms of spirit and excitement.”

Kennedy has had three pep assemblies this year, all alike in rowdiness.

However, can the intensity become too much?

There was a specific incident this year that could leave a bad mark on Kennedy pep assemblies. While the Japanese exchange students were visiting here, they were able to experience Kennedy culture through a pep assembly, but student Asa Sairo was hit in the face when someone threw a silly string can during the assembly.

It left a nasty gash that sent Sairo to the hospital. She returned to school the same day, assuring others that she was fine.

Kline mentioned the safety incident on the announcements the next day and reminded students not to throw anything.

“I would suspect in this situation, they didn’t do it on purpose. They weren’t trying to hurt someone, they were just being stupid,” Kline said.

Activities director Aaron Stecker has had to rethink students’ use of silly string. If students want to keep it part of pep assemblies, he says that students have to be smart.

“My biggest concern is making sure we’re doing things that are fun and not harm,” Stecker said.

Students need to know what is allowed and what isn’t. If students are aware of the boundaries they can have fun as well as be safe.

“While we flirt with the not-okay sometimes,” Stecker said, “I really think that students respect the pep assemblies and expectations.”

Freshman Isabella Perez experienced pep assemblies for the first time this year. She found herself caught in a situation that left an impression on her, explaining that during an assembly a student was cheering and flailing around, and side-swiped the glasses off Perez’s face. The glasses fell between the bleachers, all the way down to the gym floor. The lens popped out and the frame broke, which resulted in Perez buying new frames.

“I think there’s some sort of mob mentality thing, where you want to act crazy because there’s other people around, so people go all out,” Perez said.

Pep assemblies do offer the chance to show excitement about school activities, as well as have fun during the school day.

“School is so regimented, so structured, so high pressure and stress,” Stecker said. “We just try to create an atmosphere where we have 90 minutes to let our hair down and just have fun.”

There are organized student games, singing, cheers, and dances. There are bags of confetti, silly string, and more bags of confetti. Ultimately, through participation, students try to win the contests and be awarded the coveted “spirit stick.”

Kline says the school wants assemblies to be “something where students can have as much fun as possible while still being safe,” though that can be hard to guarantee when there are 1,700 students in the gymnasium.

Students need to watch the physical boundary lines, as far as where students can stand. “Sometimes I want people to back off a little bit,” he said. In the frenzy of the assembly games and singing, on the main floor there can be a growing number of students that can become a standing crowd that expands onto the gym floor space.

Stecker emphasized for pep assemblies to work safely, “there has been mutual trust, and mutual respect between the students, and teachers and administration.”

Kline says he never has any concerns going into a pep assembly.

“I really think that we have a great student body here that can handle it,” Kline said.